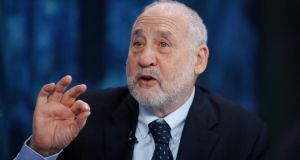 Rejecting the argument that globalisation has reduced poverty, Mr Stiglitz says 500 million people have been moved out of poverty in China because it exploited globalisation to build its industrial base.

“It wasn’t globalisation the way the World Bank, the International Monetary Fund, or [former head of the World Trade Organisation] Peter Sutherland would have had it,” he said. “These countries managed globalisation on their own terms. China never liberalised its capital account. . . It took it [globalisation] and implemented it to its own advantage,” said Mr Stiglitz, speaking in London to promote his book, The Great Divide.

He criticised the negotiations to agree a new EU-US trade deal, the Trans-Atlantic Trade and Investment Partnership. US demands for greater intellectual property protection rights from the EU, equal to what it has demanded from the developing world, show the stand taken by the US trade representative “is a lie”, he argued.

Pensions: Estonia plans to unleash a potential €4.85bn on economy 11:53
Dublin Port accounts for two-thirds of vessel arrivals, half of goods handled 11:14
Tullow shares rally as African oil veteran’s stake nears 10% 10:27
Britain after Brexit will not be alone, but it will be lonelier 10:17
Election 2020: Parties' pledges on housing simply don’t add up 09:45

1 Election 2020: Parties' pledges on housing simply don’t add up
2 Britain after Brexit will not be alone, but it will be lonelier
3 Pensions: Estonia plans to unleash a potential €4.85bn on economy
4 Marlet snaps up 1.8 acre Sandyford site for €17m
5 Getting out from under ‘never-ending’ Celtic Tiger debt burden
6 Orange Capital Partners acquires prime Dublin rental portfolio for €75m
7 Banks withdrawing from ATMs – another failure of regulation
8 Ryanair accepts four-year labour agreement with Irish pilots
9 Fair Deal nursing homecare leaves little for bills and gifts
10 It’s getting easier and more profitable to be green
Real news has value SUBSCRIBE