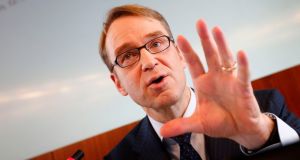 The euro zone crisis is not over, France is slipping on reforms and the Bundesbank has set aside billions in new provisions for what it sees as risky Europe an Central Bank moves, Germany's central bank said today.

Presenting Bundesbank 2012 results that showed a sharp increase in its risk provisions, the German central bank's chief, Jens Weidmann, urged governments to tackle the roots of their troubles with reforms.

Mr Weidmann, a member of the ECB’s Governing Council, opposed the bank’s yet-to-be-used bond-buy plan agreed last September and believes euro zone governments must shape up their economies to exit the crisis rather than looking to the ECB for help.

“The crisis is not over despite the recent calm on financial markets,” Mr Weidmann told a news conference.

The Bundesbank is concerned about risks the ECB has taken on to help banks through the crisis, for example by accepting lower-rated assets in return for cash, exposing it to larger losses if a bank fails to repay.

The Bundesbank said it increased its risk buffers by ¤6.7 billion to ¤14.4 billion.

Germany, Europe’s economic powerhouse expanded robustly during the first two years of the euro zone crisis but growth slowed last year and the economy shrank 0.6 per cent in the fourth quarter.

Most economists still see the country escaping a recession, defined as two consecutive quarters of contraction, by growing weakly in the first quarter before regaining momentum. German growth is crucial to underpinning the euro-zone economy.

“The German economy is structurally in good shape,” he said, though confidence had been hit by the euro zone debt crisis, which posed the biggest risk to a recovery.

“Only some of the confidence lost as a result of crisis has been recovered so far," Mr Weidmann said in a statement accompanying his news conference.

He nonetheless expected growth to strengthen as the year progresses, assuming there are no further shocks to confidence.

The German economy was still in good shape, Mr Weidmann added. Germans' concerns about inflation should be taken seriously, he said, but there was no reason to stir up fears of inflation.

“In the short term, we in the euro area have, if anything, declining inflation risks,” Mr Weidmann said, adding that in the medium-term it was important to leave no doubt about the 'stability orientation' of ECB monetary policy.

The ECB discussed cutting interest rates last week, but decided to keep them on hold, citing positive economic survey indicators, which in turn suggest it is ready to keep rates at 0.75 per cent barring the economy taking another turn for the worse.