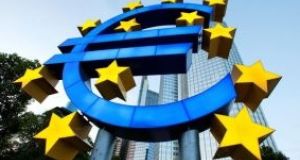 Business activity in the euro zone during October was not as robust as first thought, a survey showed on Friday, adding to signs the bloc’s recovery remains on track but is struggling to gain momentum.

For the second month running firms held prices steady despite costs rising at the steepest rate since July 2015, indicating companies’ pricing power remained muted and that the European Central Bank (ECB) might have to do more to drive up inflation.

Markit’s composite purchasing managers’ index (PMI) for the euro zone was 53.3 in October, below a 53.7 flash estimate but beating September’s 52.6 and its highest since January.

The reading has been above the 50 mark that divides growth from contraction since mid-2013.

“The economy is ticking along but there is a lack of traction and that tells you the ECB’s best efforts to stimulate the economy haven’t worked yet,” said Peter Dixon at Commerzbank.

Markit said the PMI pointed to fourth-quarter economic growth of 0.3 per cent, in line with the prediction in a Reuters poll.

A stable but lacklustre economic outlook will push the ECB to tweak its asset-purchase programme and announce by year-end an extension to it beyond March 2017, a Reuters poll found last month.

The input prices sub-index was 54.2, up from 53.5. Inflation was just 0.5 per cent in October, the European Union’s statistics office said last week, while the figure used by the ECB as core inflation dipped to 0.7 per cent from 0.8 per cent.

Although costs were rising, firms in the bloc’s dominant service industry returned to discounting to drum up trade after holding prices steady last month. The output prices sub-index for the sector was 49.7, down from September’s 50.0 and the flash 50.3 estimate.

Those price cuts helped drive activity up from the previous month and the services PMI registered 52.8, above September’s 52.2 but below the 53.5 preliminary reading. –