Move means next government can aim for structural deficit of 0.5% of GDP 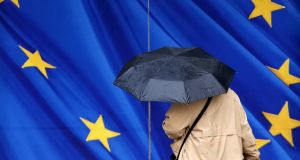 The European Commission has backed moves to grant Ireland up to €1.5 billion in additional “fiscal space” for new tax and spending measures in coming years.

An unpublished document seen by The Irish Times shows that the European Union executive has agreed to relax Ireland’s budgetary targets for the three years to 2019. The document comes on the heels of solid tax figures for January, after strong retail trading over Christmas and a jump in new year car sales.

The commission has revised Ireland’s minimum “medium-term objective”, providing more scope to cut tax or boost spending in that period.

As the election campaign gets under way today, the move means the next government will be permitted to target a structural deficit of 0.5 per cent of gross domestic product.

Ireland is subject to a new set of European targets from 2016 because the Government brought the headline deficit below the EU limit – 3 per cent of GDP – in 2015 .

Before the revision the Irish authorities were obliged to eliminate the structural deficit by delivering a balanced budget in structural terms by 2019.

According to Department of Finance estimates the change essentially means the next administration will have a further €1.5 billion available for tax and spending measures once the new target is met.

The new “medium-term objective” will be set out formally when the department submits a fiscal update to the commission in April, one of the first stages of the 2017 budgetary cycle.

The revision means the next government could reach its target earlier than expected, opening greater leeway to cut tax or increase spending.

The 22-page document cites improving debt dynamics, and a reassessment of the economic aspects of ageing, as the primary reasons behind the revision.

It was prepared by “alternates” of the economic and financial committee, a group that includes senior finance officials from member states and the European institutions. The review of fiscal targets is undertaken every three years.

The new tax data shows the exchequer was in surplus to the tune of €1.198 billion in January compared with a €781 million surplus one year previously.

“This €418 million improvement in the exchequer balance is driven by increased tax receipts and reduced expenditure,” the department said.

Net current spending was €3.49 billion, down €256 million in one year with €182 million attributable to the Department of Social Protection.

Budget 2016 was predicated on a 5.8 per cent increase in annual tax revenue, but a tax surge in late 2015 means the real increase required to meet that objective is 3.6 per cent.

Minister for Finance Michael Noonan said: “It is clear that the strong end to 2015 for the economy is continuing into 2016.”

While Minister for Public Expenditure Brendan Howlin said was “too early” to read anything significant in the spending figures, he said his colleagues were “well aware” of the importance of meeting targets in 2016.

Unlike in previous years, the next government will not be permitted to introduce supplementary estimates to fund any overruns.