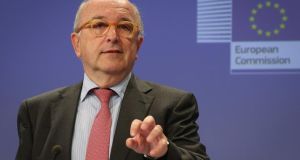 Within 30 minutes of Minister for Finance Michael Noonan announcing the end of the “double Irish” tax loophole in Tuesday’s budget, the European Union’s commissioner for taxation was asked by journalists in Luxembourg for his view.

His response was telling. The Irish decision to abolish the loophole was proof the EU’s decision to put tax on the agenda gets results, commissioner Algirdas Semeta said.

The OECD in Paris was equally laudatory, welcoming Ireland’s “smart and courageous” move.

Despite officials noting that this is not the first time Ireland has addressed corporate tax issues in the budget – last year the Government pledged to assess tax residency rules – there is little doubt that Tuesday’s announcement was a response to international pressure, in particular the opening of a European Commission investigation into two specific tax rulings granted to Apple.

The pre-emptive move arguably made sense in relation to the upcoming OECD rules on base erosion profit shifting (Beps) – Ireland would have had to bow to pressure on new standards sooner or later – but the controversy over Ireland’s corporate tax regime opens up broader questions about the EU’s jurisdiction over tax issues.

Under EU law, member states have the right to set their own tax rates – a guarantee that was clarified during the Lisbon and Nice treaty debates in Ireland.

Further, article 107 of the Treaty of the Functioning of the European Union, which deals with state-aid and competition, outlines that countries are also permitted to offer specific credits to companies to encourage economic activity in certain areas. Specific devices such as “patent boxes” and R&D credits are legal under EU law, but with certain restrictions – mainly if they are deemed to be in breach of state-aid rules.

The EU has always exercised some power over perceived abuses of tax systems. Its code of conduct group for business taxation dates back to the late 1990s, comprising representatives of each member state, including Ireland. Although voluntary, it has achieved significant changes in the tax structures of member states. For example, it found the 10 per cent corporate tax rate offered by Ireland to certain activities in the IFSC and Shannon Zone to be unfair. The finding was partly responsible for the system being phased out and for the creation of the flat 12.5 per cent corporate tax rate.

In terms of individual tax evasion, the EU has also been flexing its muscles. Just this week Austria and Luxembourg bowed to mounting pressure and agreed to sign up to a law on automatic exchange of information, which will oblige banks to disclose account details of customers from other member states, in a bid to crack down on individual tax evasion.

But the entry of the European Commission’s powerful competition arm into the debate over corporate taxation represents a new front in the EU’s power over the tax regimes of member states.

While previous tax cases have involved small-scale state aid – this year’s investigation into the Dutch government’s financial support for its ports, for example – the probes into Apple in Ireland, Starbucks’s arrangements in the Netherlands, and Luxembourg’s tax rulings for Fiat and Amazon have by far the most serious ramifications. Unlike the code of conduct on business taxation, competition decisions are binding and involve sanctions.

While outgoing EU competition commissioner Joaquin Almunia has defended the commission’s right to probe taxation issues, his announcement of a number of state-aid inquiries in the final months and weeks of his five-year tenure fuelled suspicion that the move against Ireland has been political.

Ireland has attracted much more international press coverage of its tax structures than the Netherlands, for example, despite the announcement of the Starbucks investigation.

Sources have told the The Irish Times that the Minster for Finance has already written to incoming competition commissioner Margrethe Vestager, the former Danish finance minister, outlining Ireland’s position vis-à-vis tax rulings. Rumours suggest further investigations could be in the offing, though Dublin’s decision to close the “double Irish” could lessen the pressure.

Noonan’s announcement that Ireland is to consider the introduction of a “patent box” structure – a device that has already roused the attention of the commission’s competition arm – is also significant.

By closing one loophole while at the same time committing to another tax-reduction measure, Ireland is quietly demonstrating to Brussels that it is free to adopt measures to attract foreign direct investment as it sees fit.

The commission has already demanded information from nine countries about their use of patent boxes, a tax device that offers low tax rates on profits derived from activity related to intellectual property.

Britain is by far the biggest beneficiary of the device, which came into force last year, with Germany in particular believed to be suspicious that it is being used as a tax-avoidance measure.

There is a view that with Ireland having moved pre-emptively to close the tax loophole, other countries need to follow suit. Dublin has made the decision to introduce a significant change to its tax regime. As the new EU competition commissioner takes office in the coming weeks, the Government will be hoping that decision pays off.