Coalition can depart from fiscal rules, but scope for tax cuts is limited 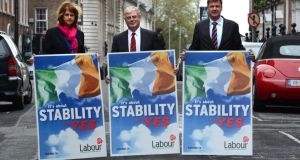 Ireland has come a long way since the worst days of the crisis. However, whether the country emerges stronger or weaker from the tumult will be determined by avoiding past policy mistakes in the coming years.

An unheralded achievement of recent years has been the creation of a new institutional framework to support prudent management of the public finances. Comprising both national and European elements, the framework sets minimum requirements to guide the deficit back towards balance and to support a path to safer debt levels.

If implemented effectively, with real domestic ownership, the framework should ensure that there is no repeat of the pre-crisis mistake of allowing spending to grow too fast based on what turn out to be unsustainable revenues.

Unfortunately, any complex set of rules can sometimes throw up anomalies. One feature of the framework – the Expenditure Benchmark – is creating such an anomaly for 2016. The source of this anomaly and its implications for policy are examined in a paper published today by the Irish Fiscal Advisory Council.

The State would then enter what is known as the preventive arm of the SGP. This will require the deficit adjusted for cyclical factors, the so-called structural deficit, to narrow by at least a 0.5 per cent of GDP each year until the medium-term objective of a balanced budget is reached.

Achieving this path for the structural deficit is supported by another rule, the aforementioned Expenditure Benchmark. This sets a limit on the growth of a measure of government expenditure.

Discretionary tax cuts lead to a tightening of this benchmark. The benchmark is intended to ensure that tax and spending decisions are consistent with achieving the 0.5 per cent of GDP reduction in the structural deficit each year.

However, certain design features of the benchmark together with current Irish circumstances mean it will likely be significantly more constraining in 2016 than needed to achieve the required structural balance.

While the Fiscal Council strongly supports the principle underlying the benchmark as a tool to avoid unsustainable expenditure increases, it is concerned that meeting the existing benchmark calculation would lead to a fiscal stance that is inappropriately tight for 2016 given the unusual path of Ireland’s estimated potential output growth.

As part of its statutory mandate, the council is required to assess, with reference to the requirements of the growth pact, whether the fiscal stance is conducive to prudent economic and budgetary management.

It is also required to assess compliance with the Budgetary Rule of the Fiscal Responsibility Act 2012, which effectively mirrors the preventive arm of the growth pact.

However, the design of the preventive arm allows room for discretion to be exercised when a country is meeting the requirement for reducing the structural deficit but shows only limited compliance with the benchmark.

First, tax and spending decisions must ensure that the deficit continues to be reduced at a prudent pace and reaches at least the targeted reduction of 0.5 per cent of GDP in the structural balance.

Second, the Government should clearly justify the departure from the existing benchmark, as well as the rationale for any new reference rate used.

Third, the Government should continue its commitment to domestic multi-year expenditure ceilings.

These measures should be based on a well-articulated medium-term fiscal plan in the Stability Programme Update to be released by the Government in April and assessed by the council in June.

Any limited departure from the existing benchmark would not create significant scope for tax cuts.

First, in the context of the Expenditure Benchmark, discretionary tax cuts reduce the allowable growth in expenditure. There is therefore limited scope to cut taxes without reducing real government spending.

Second, the State faces growing expenditure pressures in areas such as health, education and pensions in the coming years.

These needs argue against an erosion of the State’s revenue-raising capacity.

John McHale is chairman of the Irish Fiscal Advisory Council and professor of economics at NUI Galway. fiscalcouncil.ie