IMF chief warns against conference to ease burden on Greece 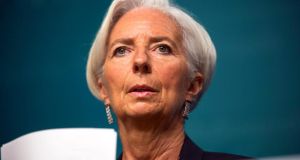 IMF managing director Christine Lagarde: “As a principle, collective endeavours are welcome but at the same time a debt is a debt and it is a contract.” Photograph: EPA/Jim Lo Scalzo.

International Monetary Fund managing director Christine Lagarde has given a cool response to the idea of a European conference to ease the debt burden on Greece and, potentially, other euro zone states.

Speaking in Washington ahead of a visit to Dublin today, Ms Lagarde said “collective approaches are always good at the European level”, but warned about the consequences of a forum to change the terms on a country’s debts or to write them off in part.

Greece’s left-wing party Syriza has called for a debt conference to consider a restructuring of sovereign debt in the euro zone, similar to the 1953 London Conference that wrote off half of Germany’s post-war debt and facilitated the country’s return to economic prosperity.

Minister for Finance Michael Noonan told a meeting of Irish ambassadors and senior civil servants in Dublin last week that he was supportive of a forum to discuss debt relief for Greece, which holds elections on January 25th. Government sources suggested last week that any conference could also consider the debts of Ireland and Portugal. Ms Lagarde meets Mr Noonan today at the Department of Finance.

“As a principle, collective endeavours are welcome but at the same time a debt is a debt and it is a contract,” she told The Irish Times.

In a wide-ranging interview ahead of speaking at a conference in Dublin to discuss lessons from Ireland’s crisis, Ms Lagarde said she wished Europe’s finance ministers had been consulted during the Government’s late night discussions leading up to the bank guarantee.

“Had we had the night to think it over, to bring the key finance ministers together around a conference call, we might have come up with a different solution,” said Ms Lagarde, who was France’s finance minister at the time.

She defended the then minister for finance Brian Lenihan on the decision to introduce the guarantee, saying “he did the best he could at the time . . . in view of the abyss that was just coming up.”