Makhlouf warns that decline will be greater than 7% forecast 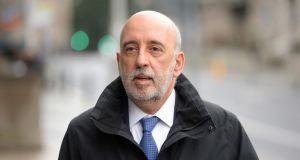 “The latest restrictions announced by the Government on Monday evening clearly have negative implications for individuals, households and businesses,” Mr Makhlouf told the Oireachtas finance committee on Wednesday.

Central Bank governor Gabriel Makhlouf said that Level 5 Covid-19 restrictions coming into effect for six weeks from midnight on Wednesday will result in Irish domestic demand falling at a faster rate this year than the 7 per cent decline his organisation forecast earlier this month.

“The latest restrictions announced by the Government on Monday evening clearly have negative implications for individuals, households and businesses across the country and for their incomes, their consumption patterns and their investment plans,” Mr Makhlouf told the Oireachtas finance committee on Wednesday.

“Ultimately, solving the economic crisis will be dependent on our ability to manage the health crisis as a healthy economy needs a healthy workforce, healthy consumers and a healthy community.”

Responding to questions from committee members, Mr Makhlouf said that if there are repeated lockdowns, this will further affect the Central Bank’s economic forecasts, which currently see overall domestic demand, which strips out the activity of multinationals, recovering modestly to rise 1.6 per cent next year, fuelling 3.4 per cent economic growth.

“Not only do we live in very uncertain time, but times that are also changing the structure of our economy,” Mr Makhlouf said. “The future of the Irish economy and the European economy depend on the path on the virus and the speed at which a vaccine arrives.”