However, five-country group insists it is not trying to challenge IMF or World Bank 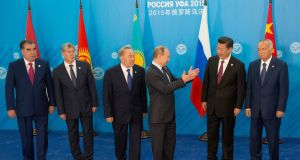 As Europe focused on Greece’s travails, leaders of the so-called Brics nations launched ambitious financial projects that could, in time, come to offer alternatives to the US-dominated International Monetary Fund and World Bank.

Brazil, Russia, India, China and South Africa agreed last week to contribute $10 billion (€9 billion) each to the New Development Bank, which should start lending in 2016 and could double its starting capital over the next few years.

Russian president Vladimir Putin, hosting the summit in the city of Ufa some 1,200km east of Moscow, said the bank would “help finance joint, large-scale projects in transport and energy infrastructure, industrial development”.

“These institutions are, rather, new instruments for addressing our shared objectives...and for promoting mutual trade and investment. We see the creation of these new institutions as our contribution to making the international financial architecture more stable and resistant,” he told Russian state media outlet RT.

For Mr Putin, however, the Brics gathering was a high-profile opportunity to show the world that Russia’s exclusion from the G8 over its interference in Ukraine, and the imposition of EU and US sanctions, had not made it an international pariah.

The development of alternatives to the IMF and World Bank also chimes with Mr Putin’s calls, repeated over many years, for the creation of a “multi-polar” world to counter perceived US financial, diplomatic and military hegemony.

In reducing its dependence on western-led organisations, however, Russia and its fellow Brics could find themselves facilitating China’s rise to global dominance.

The significance of the Brics group rests largely on China’s huge financial clout and rapidly expanding global reach. The other members of the club have little choice but to make the best of Beijing’s relentless push into their regional “spheres of influence”.

China loaned $22 billion (€19.7 billion) to Latin America in 2014, more than the World Bank and the Inter-American Development Bank combined; and amid a huge surge in Chinese investment in Africa, trade between the world’s most populous state and its poorest continent surpassed $200 billion (€180 billion) last year.

“While Russia has been pushing for the creation of the Brics as a counterbalance to the G7, the real danger is that they are encouraging the creation of a vessel to extend China’s global power, just as the G7 facilitates this for the US,” Chris Weafer, senior partner at the Macro Advisory consultancy, told the Moscow Times. Moscow is particularly wary of Chinese influence in ex-Soviet central Asia, but seems to have accepted its inevitability, and perhaps considers it preferable to the growing US presence of a decade ago. China’s appetite for raw materials is also vital for Russia as the EU seeks to reduce reliance on the country’s oil and gas.

The day after the Brics gathering ended in Ufa, the city hosted leaders from member states of the Shanghai Co-operation Organisation, a loose security group led by China and Russia that includes four ex-Soviet states in central Asia. India and Pakistan, both nuclear powers, announced that they would join the bloc.

1 Opioid executive admits to ‘no morals’ ahead of prison term
2 Farmer seeks to challenge €3.6bn Intel plan in High Court
3 Little strategic thinking in either Fine Gael’s or Fianna Fail’s election manifestos
4 ‘If you don’t like challenges, you should not be in the airline business’
5 Ryanair wants Irish courts to block Skyscanner from selling its flights
6 Who are Ireland’s 17 billionaires?
7 Cosgrave should give his speech to Web Summit’s partners in Saudi Arabia
8 From chips to €14bn in trade: Ireland and Italy’s enduring exchange
9 Are there annual limits on inheritances or gifts to a child?
10 My father in a nursing home wants to gift me his house
Real news has value SUBSCRIBE