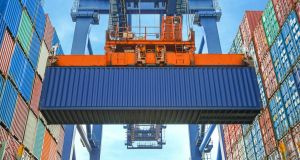 The Brexit-related crash in sterling wiped nearly half a billion off the value of Irish goods exports to Britain last year, the latest trade figures show.

The figures represent the first clear picture of how Brexit is affecting Ireland’s trade with Britain.

The value of Irish exports as a whole rose to nearly €117 billion last year, the highest annual total on record. This represented an increase of €4.5 billion or 4 per cent on the previous year’s total. At the same time, imports fell by €507 million (1 per cent) to €69.6 billion, resulting in a preliminary trade surplus for 2016 of €47.3 billion.

The largest increase in exports was of electrical machinery, apparatus and appliances which increased by €4.4 billion (150 per cent) to €7.3 billion.

There was also a sizeable jump in the exports of organic chemicals, which rose in value by €2.2 billion to €23.6 billion.

On the import side, the biggest annual change was in the mineral fuels, lubricants and related materials category, which fell in value by 27 per cent to €3.7 billion. Imports of specialised machinery also fell by 48 per cent to €1.2 billion.

“Uncertainty over the implications of Britain’s decision to leave the EU suggest risks on the external trade front remain elevated for 2017 and beyond, especially for food exporters,” Merrion analyst Alan McQuaid said. The movement in the euro/sterling exchange rate will be critical in this regard, he said.

Mr McQuaid said one can only speculate as to how Brexit will impact Ireland in the coming months and years, but there is likely to be a negative impact on trade. He noted that the UK is the second largest single-country for Ireland’s goods and the largest for its services.

“The trade outlook for 2017 and beyond remains clouded in uncertainty, but we are still anticipating another solid performance this year. As this juncture, we are projecting a surplus of €45 billion,” he said.