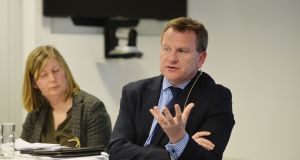 Blanaid Clarke, TCD professor of corporate law, and Danny McCoy, chief executive of Ibec, speaking at an Ibec conference on the implications of a potential Brexit for Ireland. Next month’s British referendum on EU membership is ‘by far’ the single biggest issue in a generation for Irish business, according to Danny McCoy. Photograph: Alan Betson/The Irish Times

Next month’s British referendum on EU membership is “by far” the single biggest issue in a generation for Irish business, according to Danny McCoy, chief executive of the business representative group Ibec.

Mr McCoy said Ireland and the UK were dynamic, open economies with growing populations – which put them at odds with mainland Europe.

The likelihood was that the UK was going to become the Europe’s largest economy. Having such a large, dynamic economy leave the EU would constitute a huge blow for Ireland, the UK, and the rest of the EU, he told a conference in Dublin.

He said, given the deal negotiated by the UK with the EU in February, which comes into effect if Britain remains in the union, the fact was the world would not remain the same after the referendum, irrespective of the outcome of the vote.

The chief executive of Dawn Farm Foods, Larry Murrin, said he was “dumbstruck” by the comments that have been made to him by customers in the UK in relation to the referendum.

He said it was very prevalent in middle-class Britain to express concerns about immigration and the cost of social welfare, and not that the UK leaving the EU might result in very material changes in terms of trade.

The conference, on the legal implications of a potential Brexit, organised by Ibec and the Irish Centre for European Law (Icel), was told by Icel chair, former Supreme Court judge Fidelma Mackin, that something approaching 40,000 pieces of legislation would have to be visited by the UK and the EU in a two-year period if the UK voted to leave.

She said the UK had worked well and closely with the EU since it joined, and it was not clear why it was now having a serious referendum on a possible exit.

As a result, a number of the Conservative party’s leading figures in government are campaigning for Britain to leave the EU.

Opinion polls suggest the result is in the balance with each side receiving about 40 per cent support, leaving both sides fighting to persuade the “don’t knows” to join them.