Borrowing target to be cut due to strong tax returns

Noonan set target of 1.2% of GDP for year but strong trend in tax receipts likely to lower it 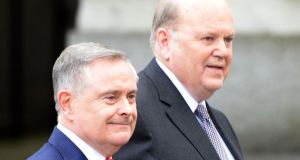 The Government is to revise down its borrowing target for this year in the light of exchequer returns for 2015, to be published today, which will show strong tax trends continuing to the end of the year. In the October budget, Minister for Finance Michael Noonan set a borrowing target of 1.2 per cent of GDP for this year, but the strong trend in tax receipts means he will indicate today that the likely out-turn will be significantly lower.

Boosted by once-off receipts from AIB of €1.6 billion in December, the exchequer’s cash position is expected to be close to balance for 2015, with indications a tiny deficit of less than €100 million is on the cards.

Once-off receipts such as the money from AIB are excluded from the EU estimate of our borrowing, which aims to measure the underlying picture.

Mr Noonan is expected to say that borrowing this year will now be lower than the 1.2 per cent budget target, though he will not give a new forecast as significant technical work is needed to agree the level of borrowing for 2015 as measured by the EU rules.

At the end of November, the exchequer had a cash surplus of €322 million. Normally borrowing is heavy in December and would have been expected to put the exchequer into a significant cash deficit for the full year. However, due to the AIB payment, the final result will be close to a balanced cash position for 2015.

1 How can I view my dead brother’s will if I’m not the executor?
2 Dublin’s Morrison Hotel lined up for €85m sale
3 Michel Barnier rejects UK’s call for Canada-style trade deal
4 Aqua Dome in Tralee could close over insurance claims, directors warn
5 Applications for 961 new homes in Dublin and Meath rejected
6 Just 8,000 houses built last year offered for sale on open market, says CIF
7 South Dublin site with full planning for 34 homes seeks €4m
8 Finance Ireland’s IPO, Huawei and Irish 5G, and pay rises at Bank of Ireland
9 Politics more hazardous to economy than Brexit or coronavirus
10 Bursting of Tesla bubble a case of ‘not if, but when’
Real news has value SUBSCRIBE