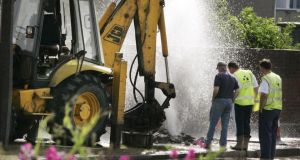 Investment in our infrastructure, like water services, will underpin growth in the future. Photograph: Dara Mac Dónaill

Ireland’s policymakers were authors of our home-grown “Celtic crash”, their errors exposed and compounded in brutal fashion just as the global financial crisis struck. From the Honohan and Regling-Watson reports to the banking inquiry, we have been treated to seven years of introspection.

It is critical we learn the right lessons, and there have been some encouraging changes to how we formulate economic policy: a highly-respected economist as Central Bank governor, an injection of economic expertise into the Department of Finance, incremental improvements to the budgeting process.

For all the focus on “what went wrong”, however, it’s easy to lose sight of what went right – what gave rise to the pre-2002 vintage, export-driven Celtic Tiger.

Since the late 1950s, Ireland has followed a broadly successful strategy of trading its way to prosperity, developing a vibrant, responsive FDI sector. With the rise of “factory Asia”, it was nimble enough to move up the value chain, leading multinationals like IBM transitioning from manufacturing to services.

While the 2009 retrenchment in global trade hit Ireland hard, this openness has since helped the economy bounce back from deep recession. Resilient global demand for products such as medical devices and pharmaceuticals bolstered a struggling domestic economy.

The perennial flip-side to Ireland’s dynamic FDI sector is an indigenous private sector that lags in productivity, innovation and economies of scale. Certainly, domestic SMEs have integrated into multinationals’ local supply chains, as service providers for example, but technology and knowledge spillovers have lagged aspirations.

For too long, indigenous enterprise was not among policymakers’ priorities. We have never had a coherent indigenous industrial policy.

For all the navel-gazing since 2008, not enough attention has been given to where we go from here.

Acres of newsprint are devoted to our dysfunctional property market – no less a national obsession on the way down as on the way up. Ensuring affordable, accessible housing is one component of economic competitiveness and national wellbeing, but its importance should be kept in perspective. Of course, steps are needed to avoid another burst property bubble, and to better match supply with demand, but we need to avoid fighting the last war.

Sustainable prosperity beyond 2020 will have less to do with how many houses we build, and what they cost, than with how our private sector responds to the shifting sands of the global economy.

More than half of global output is now accounted for by emerging markets. If it can transition to a more sustainable growth model, China will soon be the world’s largest economy. Production of goods and – increasingly – even the provision of services have become ever-more fragmented across national, regional and global value chains.

There is no reason why, in time, the same technology that allows for the outsourcing of professional services to India cannot facilitate the outsourcing of innovation from Silicon Valley to places such as Dublin’s “Silicon Docks”.

Critically, for Ireland, aggressive tax competition has become politically unsustainable. While there is a de facto policy-lock on our 12.5 per cent corporation tax rate, what gets taxed at this rate will soon become more clearly defined.

The OECD-led initiative to tackle base erosion and profit shifting (BEPS), to be concluded by year-end, poses upside and downside risks. To the extent that multinationals’ value-adding, job-creating activities take place in Ireland, there is little threat. Where profits are booked here purely as accounting wheezes, however, the game may be up.

Meanwhile, our 12.5 per cent rate may become more attractive for inward investment in a world where shifting profits to zero-rate regimes is no longer viable.

What else can we do to reinforce our growth model?

As a small, open economy, we need to position ourselves to thrive amid these shifting sands, while ensuring flexibility and resilience to ‘unknown unknowns’. Putting all our eggs in few baskets has previously reaped dividends, but diversification into “nearby” sectors and emerging markets is increasingly important.

We should be looking to attract the higher value-added activities of multinationals to Ireland while building better bridges to domestic enterprise. There are three areas where increased investment would yield significant benefits to underpin Ireland’s growth model: skills, infrastructure and innovation.

The dichotomy between domestic and foreign-owned sectors is particularly stark in relation to innovation. We need to make it easier for innovative start-ups to become scale-ups. And, we must ensure that domestic firms can bridge the gap to our universities and multinationals operating at the global knowledge frontier.

It is too soon to take economic recovery for granted, while the social scars of the “Celtic crash” will take time to heal. Looking beyond the horizon of the government’s Medium Term Economic Strategy, Ireland’s growth model may not need to be reimagined. For that we are fortunate. However, it needs tweaking and investment so we can thrive beyond 2020. Victor Duggan, who writes here in a personal capacity, is adviser to the Secretary-General of the OECD. He has worked for the European Commission, European Investment Fund, World Bank and Irish Labour Party, where, when they were in Opposition, he was adviser to current party leader Joan Burton.