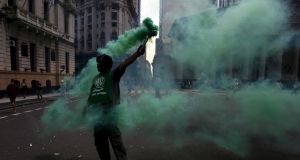 After more than a decade of torturous and often acrimonious negotiations, Argentina looks finally to have reached a deal with holdout creditors that paves the way for a return to capital markets 14 years after its then record default in 2001.

On paper, the $4.7 billion agreement announced in New York on Monday between the new Argentine government of President Mauricio Macri and a group of US hedge fund billionaires looks a compromise. Argentina will repeal laws passed to prevent any agreement with the holdouts who, in turn, will accept a 25 per cent haircut on their investment having previously demanded par value.

But if neither side got what it wanted, there is still a clear winner.

Being paid 75 cents on the dollar for bonds they snapped up for pennies at the height of the default crisis represents a major return on the holdouts’ investment. As a bonus, Buenos Aires also agreed to pick up most of their legal fees.

“The big winners here are the holdouts. They made a killing with this trade,” says economist Alberto Bernal, chief strategist at XP Securities and longtime Argentina watcher.

“And the Argentine public is the loser. It was out of the market for 14 years. If Argentina had had access to capital markets its economy would be in a much better situation now.”

It was last December’s change of administration in Buenos Aires that made this week’s deal possible. Outgoing Peronist president Cristina Kirchner turned the stand-off with the “vulture funds” into a point of principle for her populist administration.

Macri made an agreement and, with it, access to financing – a priority in his quest to salvage an economy that, after more than a decade of Peronist populism, was drifting onto the rocks being almost out of cash while running a deficit of over 5 per cent of GDP.

On taking office, as a first signal of a change in direction, he swapped the country’s legal representation before the New York court where the dispute had been tied up for years. After the intransigence of the Kirchner administration – who first agreed to accept the court’s rulings but then ignored them when these went against it – pragmatism was now the order of the day. It was a strategy that quickly bore fruit.

“Put simply, President Macri’s election changed everything,” wrote judge Thomas Griesa last month in a clear signal that he was moving towards forcing a deal between the two sides.

The agreement still has hurdles to overcome. Macri must convince Argentina’s congress to repeal the Lock Law that prevents him from offering better terms than those that were on offer in a botched 2005 debt restructuring whose failure to win support from enough creditors led to the impasse and prevented the country’s return to capital markets.

Given his party’s lack of a congressional majority, that will require negotiation. He will be opposed by supporters of the former Kirchner administration. Mrs Kirchner’s former finance minister described the deal as capitulation to “extortion”. Others warn it will lead to lawsuits by those who settled in 2005 for 35 cents on the dollar compared to the 75 cents achieved by the holdouts.

But Macri will be able to dangle the promise of access to billions of dollars in new credit before the governors who exert huge influence over their provincial delegations in the fractured legislature. A deal would pave the way for a return to markets, not just of the sovereign but also the cash-strapped provinces.

This will be tempting as, since the 2001 default when Argentina gave up servicing its debt, defaulting on almost $100 billion in bonds, the country has been subjected to a punishing experiment in autarky – a policy of establishing a self-sufficient and independent national economy.

At the time of the take-it-or-leave-it restructuring in 2005, the lack of an agreement with enough bondholders to allow a return to market was alleviated by the commodities boom. Ever higher prices for the country’s soy exports meant foreign currency poured into the country providing the government access to dollars.

But the positive shock of the boom eventually wore off and forced the government into increasingly desperate measures such as the forced nationalisation of the private pension system in 2008 in its hunt for funds.

In a speech before congress on Tuesday, President Macri calculated that “lack of access to credit has cost Argentina $100 billion and more than two million jobs that were not created”.

Many economists agree that the cost the country paid for being locked out from financing was high. XP’s Bernal estimates that Argentina’s GDP would be worth 25 per cent more today if the Kirchner administration had not acted so aggressively with investors in 2005’s negotiations.

The Kirchners’ hard-ball tactics meant Macri will now be the one to take advantage of the benefits gained by Néstor Kirchner’s unsuccessful restructuring, which slashed the country’s debt-to-GDP ratio that today stands at 46 per cent. With only 11 per cent of this in private sector hands, Argentina is now an attractive option compared to more highly leveraged emerging market sovereigns.

This means that, despite eight defaults since independence, there is likely to be significant investor appetite when the country returns to markets in the coming months, likely with an initial $15 billion debt issuance.

Argentine defaults: Stretching all the way back to 1827

1827 - The first of eight sovereign debt defaults by Argentina leads to a stand-off with creditors that takes 29 years to resolve.

1998 - Fallout from the Asian financial crisis of the previous year reaches Argentina setting off a brutal five-year recession.

2002 - The battered economy contracts by a further 11 per cent, unemployment soars and half the population is dumped into poverty.

2003 - A devaluation of the peso the previous year and the halting of debt repayments help spark the economy back into life.

2005 - Argentina offers creditors a take-it-or-leave-it debt restructuring deal which implies a 65 per cent haircut on their investments. Most cave in and accept but others vow to fight for more.

2010 - Unable to access markets because of stand-off with the holdouts Argentina reopens 2005 deal to those who rejected its terms five years previously. More sign up but vocal core of holdouts remain.

2014 - Remaining holdouts legally corner Argentina in US courts in pursuit of full repayment forcing it to declare an eighth sovereign default as it is prevented from paying interest on the debt restructured in 2005.

2016 - Argentina agrees to pay holdouts 75 cents on the dollar in deal that paves the way for the country’s return to capital markets 14 years after 2001 default.

1 Hurrah for the companies giving staff more time off
2 RTÉ to seek 70 voluntary redundancies as ‘large costs’ beckon in 2021
3 ‘We lost money on our planned wedding in Spain. Covid saw to that’
4 Some Irish money market funds came close to danger in March
5 Covid-19 will worsen shortage of accountants, says CPA Ireland
6 Aryzta to pursue asset sales as takeover talks fail
7 How long can Government afford to keep State pension age at 66?
8 Sustainable investment: How your pension can help tackle climate change
9 Start-up Loanitt raises €570,000 as it looks to double headcount
10 ‘French people are pretty relaxed. They don’t pander to scaremongering or hysteria’
Real news has value SUBSCRIBE