Apple tax appeal: The three arguments Government to use

‘How could FDI come to EU if they thought deal could be overturned a generation later?’ 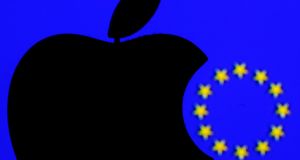 The Government’s appeal against the European Commission’s ruling on Apple’s tax arrangements in Ireland will rely on three major arguments. Illustration: Dado Ruvic/Reuters

The Government’s appeal against the European Commission’s ruling on Apple’s tax arrangements in Ireland will rely on three major arguments.

Senior figures in Government, including Taoiseach Enda Kenny and Minister for Finance Michael Noonan, yesterday disclosed the core issues for the appeal, which is being prepared by Attorney General Maire Whelan.

The first is that the Revenue Commissioners acted in accordance with the law and treated all taxpayers equally, doing no deals or favours.

The Revenue Commissioners issued two opinions to Apple in Ireland, one in 1991 and the second in 2007. It was on that basis that Apple operated its tax structures.

A briefing paper will argue that the Revenue simply stated the operation of the applicable tax laws that were in place at the time.

A briefing paper prepared in advance of the decision set out this argument.

“While it is not possible to comment on the specific facts of the case which remain subject to taxpayer confidentiality, it is emphatically the case taht there was no departure from the applicable Irish tax law by Revenue… and that full tax due was paid in accordance with the law.”

The second major argument is that the EU Commission’s decision, ostensibly in the area of competition law, amounted to an intrusion into Ireland’s sovereignty, specifically its right to conduct its own tax affairs.

The Taoiseach put huge emphasis on this yesterday: “I regard this matter as questioning Ireland’s right as a sovereign nation to set out policies that are appropriate for Ireland. We stand over our 12.5 per cent corporate rate tax 100 per cent.”

Minister for Public Expenditure Paschal Donohoe and Mr Noonan also laboured this point. The latter said: “Under the Treaties tax affairs are a competence for Sovereign governments. We are going to appeal on the basis that this is an intrusion beyond the competence of the Commission to intervene in these matters.

The final ground is a more technical one, but one on which Mr Noonan placed major emphasis yesterday.

He referred to the OECD guidelines on “arms length standards”. This refers to the practice of subsidiaries selling services or goods to other subsidiaries within an overall corporation. The arm’s length standard ensures the price point is pitched at a level that is realistic and close to market value. This has helped cut off elaborate schemes and loopholes used by companies for the purposes of tax avoidance.

Mr Noonan said that the guidelines only came into effect in 2010, yet the Commission wanted to apply it to periods up to two decades before when the rule did not exist.

In other words, he said, the Commission was trying to apply a guideline retrospectively in order to collect taxes. He contended this was wrong.

“How could any foreign direct investor come into Europe if they thought the valid arrangements they made under law could be overturned a generation later and they would be liable to pay back money? That is the essential key issue.”