More than 1,400 business leaders and entrepreneurs expected to attend event 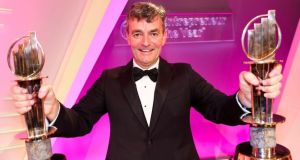 Last year’s overall winner of the EY Entrepreneur of the Year was Mark Roden of mobile payments firm Ding.

Entrepreneurs from 24 companies are finalists for the title of EY Entrepreneur of the Year, the winner of which will be announced at an awards ceremony in Dublin this Thursday.

More than 1,400 business leaders and entrepreneurs are expected to attend the event, with one winner selected from each of the three categories – emerging, industry and international – as well as an overall winner.

The overall winner will represent Ireland at the World Entrepreneur of the Year awards in Monte Carlo next June.

Selected by an independent judging panel of previous winners chaired by 2006 EY Entrepreneur of the Year, CPL Resources chief executive Anne Heraty, the 24 finalists represent a broad spectrum of sectors from technology, manufacturing and life sciences through to engineering, agriculture and health and beauty.

The finalists employ more than 5,000 people between them and generate annual revenues of €1.5 billion.

The finalists in the international category are: Frank Madden of Crest Solutions; Graham Stubbs of Diona; Denise Tormey of PlanNet21; Seán O’Sullivan of SOSVentures; Alan Clarke of StatSports; Alyson Hogg of Vita Liberata; Ross Kelly and Conor Crowley of Vizor; and Patrick and John Collison of Stripe.

Last year’s overall winner was Mark Roden of mobile payments firm Ding. Headquartered in Dublin, Ding enables migrant workers to support family back home by facilitating the instant transfer of credit top-up to any mobile phone anywhere in the world.

More than 400 business leaders are expected to attend the event, which will also include a young person’s panel during which the panellists will give their perspective on their expectations from future employers.