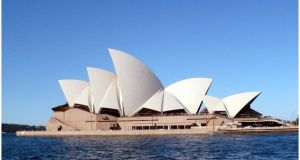 The renovations will be the first major upgrade to Danish architect Jorn Utzon’s design, which helped make the Opera House one of the world’s most recognisable buildings. Photo: Bryan O’Brien

Australia has unveiled plans for the largest renovations to the Sydney Opera House since its opening in 1973, with more than A$200 million (€138 million) earmarked to update the Unesco world heritage-listed site.

It draws more than eight million visitors a year, bringing €535.4 million into the coffers of the state of New South Wales, Deloitte Access Economics said in 2013, but gets low scores from critics and musicians for its acoustics.

The renovations, which kick off next year and wrap up in 2020, will focus on improving the acoustics and accessibility, and convert unused offices into a family-friendly Creative Learning Centre, the Opera House said in a statement.

“The Sydney Opera House is the symbol of modern Australia,” said Troy Grant, the deputy premier of New South Wales. “It is our responsibility as custodians of this extraordinary place to maintain and renew it for all Australians.”

He pledged that the renovations to Danish architect Jorn Utzon’s design, which helped make the Opera House one of the world’s most recognisable buildings, would not damage the sail-like external facade overlooked by Sydney’s Harbour Bridge.

Since its opening, however, the structure has never quite overcome the disappointment of its acoustics.

In a 2011 survey of performers, spectators and critics, Australian music magazine Limelight rated the Opera Theatre as having the worst acoustics among 20 major world venues, with its Concert Hall doing marginally better, in 18th place.

But the renovations should change all that, said Sydney Symphony Orchestra managing director Rory Jeffes.

“For the first time the Concert Hall will deliver the true ambitions of the original creators,” he said in a statement. “People will be able to enjoy the great orchestras of the world in one of the greatest acoustics in the world.”

1 Trump vs Biden: Stakes are high for the Irish economy
2 Will remote working become the norm?
3 Developers fail to stop receiver selling €60m Dublin City Quay property
4 ‘Going abroad forced me to challenge assumptions that I had’
5 Over 60% of mortgage holders miss chance to save €10,000
6 Revenue accused of harassing businesses over Covid wage subsidy scheme
7 How long can Government afford to keep State pension age at 66?
8 Media critical to Ireland’s democracy, says Taoiseach
9 PTSB’s €1.4bn sale is a sign it is preparing for a fresh loans crisis
10 Bake-off soy sauce tweet backfires for UK trade ministry
Real news has value SUBSCRIBE

Trump vs Biden: Stakes are high for the Irish economy 05:43
Diagnostics company Diaceutics launches €26m precision medicine platform 05:38
Will remote working become the norm? 05:30
‘Going abroad forced me to challenge assumptions that I had’ 05:28
Tighter regulations for car makers will drive buyers to choose electric 05:21