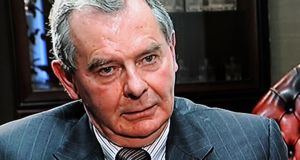 A total of 67 witnesses, including former Anglo Irish Bank chairman Seán FitzPatrick and former financial regulator Patrick Neary, can expect to be called to give evidence in the €4.5 billion court battle between the Quinn family and Anglo, according to the Sunday Business Post.

The case, set to be the largest in Irish corporate history, is due to begin this week. The Quinn family has circulated its witness list for the opening days of the trial. It includes Seán Quinn along with his five children and wife Patricia.

Plans for wind energy and utilities company NTR to buy back shares through a tender process has stalled as a result of a standoff between two large shareholders and the company, according to the Sunday Times.

The newspaper understands that a valuation of NTR shares has been set by IBI, which was appointed last year to assess an appropriate price for the buy-back. However, One51 and Pageant Holdings, which own a third of the company between them, are refusing to sign a non-disclosure agreement giving them access to the corporate finance adviser’s report.

One51, a plastics and recycling company, and investment vehicle Pageant are believed to be seeking assurances about the share valuation process before signing up.

Liberty, the 140-year-old London department store famous for its floral prints, may float on the stock market after a dramatic turnaround in its fortunes under the ownership of private equity firm BlueGem, reports the Sunday Telegraph.

BlueGem, which paid £32 million for the store in 2010, has spent five years overhauling the brand after years of losses and a lack of investment. Visitor numbers to the store, which is based in a mock-Tudor building behind Oxford Street, rose 5 per cent in the year to February 2014, with pretax profits arriving at £12.4 million. Turnover at the company, which recently featured on the Channel 4 observational series Liberty of London, is expected to be £145 million this year.

The Central Bank of Ireland has confirmed to the Sunday Business Post that it spent €55,000 on biscuits last year. The biscuit bill was part of a €1 million-plus annual spend by the bank on subsidising food, tea, coffee and other refreshments for its 1,250 staff, the newspaper reports.

The organisation said the biscuits were provided at training events, seminars, meetings with external bodies, internal meetings and press briefings. It is in the process of public procurement for catering services for its new premises at North Wall Quay in Dublin.

The varieties of biscuits purchased and consumed were not specified.

1 Data centres will force State to choose between climate and investment
2 MSD buys Takeda biologics plant in Dunboyne
3 ‘Saudi Arabia is where the opportunities will happen in future’
4 Trump’s TikTok move may have far-reaching consequences
5 Irish Times Business Awards: Local Enterprise of the Year nominees
6 The first seven winners of Business Person of the Month
7 State’s biggest landlord records 30% rise in rental income
8 How the zombie apocalypse can help prepare us for real crises
9 What will the office market look like after the great remote working experiment?
10 Scars from the crash give Irish banks 2.6 billion reasons for Covid caution
Real news has value SUBSCRIBE