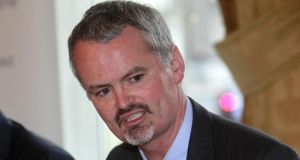 The American Chamber of Commerce in Ireland, which represents the interests of large US investors in Ireland, has appointed Mark Redmond as its new chief executive.

Mr Redmond, who is currently chief executive of the Irish Taxation Institute (ITI), will take over at the chamber in the new year from Joanne Richardson, who ran the organisation for 12 years.

He has been chief executive at ITI since 2004, and prior to that he was a director of PricewaterhouseCoopers in Dublin. The appointment was revealed to the chamber’s members, which include multinationals such as Intel and Hewlett Packard, via email last night.

“Mark has considerable experience having successfully led the Irish Taxation Institute for the past nine years,” said Peter Keegan, the president of the chamber. “He has an excellent track record in leading a membership organisation, managing a complex policy agenda and building senior stakeholder relationships, all of which will benefit the American Chamber as it enters its next phase of growth.”

The chamber has been to the fore in recent years in lobbying the government to retain the 12.5 per cent corporation tax rate.

The organisation, which represents 700 companies, will hold its annual Thanksgiving lunch this Thursday in Dublin’s Four Seasons Hotel.