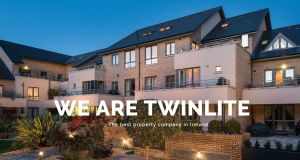 The property investment arm of the Twinlite group that built thousands of homes in Tyrrelstown has been transferred to European Property Fund (EPF). File photograph: Twinlite website

The property investment arm of the Twinlite group that built thousands of homes in Tyrrelstown has been transferred to a fund over whose assets Goldman Sachs has security.

Rick Larkin, a director of Twinlite, which faced public pressure this week over its plans to force up to 103 Tyrrelstown families to move from their rented homes, confirmed Vieira Investments has been sold to European Property Fund (EPF).

The transfer to EPF of Twinlite’s investment arm, which had assets of more than €12.5 million, comes following a refinancing of Twinlite’s loans with Goldman’s Beltany Property Finance in November.

The transfer of one of the main elements of the Twinlite group to a firm over which Goldman has such security is an indicator of the deep influence the Wall Street bank has over Twinlite’s affairs.

EPF is independently administered by Davy stockbrokers, although the ultimate beneficial ownership of the fund is the Larkin family of Twinlite.

EPF is also landlord of the 40 Tyrrelstown residents.

Goldman bought Twinlite’s loans from Ulster Bank last year. Mr Larkin has denied the decision to move the tenants was taken at the behest of Goldman’s Beltany, a so-called vulture fund.

Mr Larkin and his brother, Michael Larkin, both sons of Twinlite’s founder, Eugene Larkin, stepped down from the board of Vieira Investments the day the refinancing with Goldman was agreed last November. The same day, three senior directors of Davy were appointed to the board.

Vieira had €14.9 million of bank debt at the end of 2014 and a deficit of €2.2 million. Auditors warned it could not continue without the support of its lenders. Mr Larkin declined to comment further.