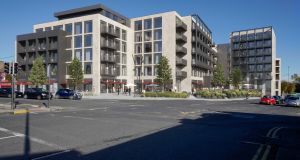 A €100 million redevelopment plan for the Stillorgan Leisureplex in Dublin is being delayed by a refusal of the operators to vacate the premises, it has been claimed.

Lorgan Leisure, whose directors are Ciaran and Colum Butler, has been renting the premises since 1999 and its operations include a bowling alley.

KW Investments Funds ICAV bought the premises in 2016 from the receivers for the previous owners Tenderbrook Ltd. This entity is related to US real estate investment group Kennedy Wilson.

KW has brought Commercial Court proceedings against Lorgan over its alleged failure to vacate the premises this month so that construction works can begin.

The case was admitted to the the fast track commercial court on Monday by Mr Justice David Barniville.

KW has planning permission to build 232 “build-to-rent” apartments on the 1.33 hectare site, involving the demolition of the Leisureplex.

KW had a short-term letting agreement with Lorgan Leisure, which paid €220,000 per annum in rent.

Jason Byers, head of residential for KW in Ireland, said in an affidavit that Lorgan agreed, as part of its short-term lease, to surrender the premises under a break clause.

He said contractors were ready to move in to clear the site but, because of the defendant’s “recent indication that it will not vacate the premises”, works cannot commence this week as anticipated.

Mr Byers said Ciaran Butler was disappointed that KW did not intend to include a bowling alley in the redeveloped site.

Mr Butler’s proposal that Lorgan Leisure would buy the Leisureplex from KW was rejected.

Lorgan has also now said it intends putting in a claim for a new tenancy under landlord and tenant legislation.

Mr Byers said the development is being done under the Government’s strategic housing legislation and any delay will significantly undermine the purpose of this policy to fast track housing developments.

Even if the harm to KW’s business could be compensated by damages, Lorgan will not be in a position to pay as its publicly available financial statement for 2018 shows it has net assets of just €376, he said.