Dublin 2 hotel, restaurant and bar is in one of Dublin’s best business and recreational locations 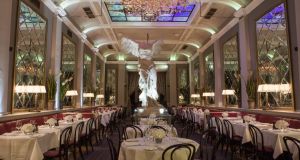 The Dawson at 35-36 Dawson Street: Morrissey’s and Savills are guiding €15 million for the hotel, restaurant and bar which are to be sold on the instructions of Declan McDonald of PwC who was appointed receiver by AIB.

Morrissey’s and Savills are guiding €15 million for the hotel, restaurant and bar which are to be sold on the instructions of Declan McDonald of PwC who was appointed receiver by AIB.

The most attractive feature of the business premises is undoubtedly the former La Stampa Restaurant, a large Victorian hall to the rear built as an engineers’ hall and converted into a bistro-style restaurant to seat around 200 diners. It has been closed since last Christmas.

Also closed is the former Faat Baat restaurant at basement level which will require considerable expenditure to get it trading again.

The Dawson is based on two interconnecting period buildings opposite the Mansion House which were acquired in 1999 by businessman Louis Murray for €8.5 million.

He is believed to have spent at least a further €6 million on redeveloping the buildings, adding 36 en suite bedrooms and a spa as well as a substantial bar and the second restaurant in the basement.

The four-storey over basement freehold premises has a rear access on to Anne’s Lane.

New owners are likely to upgrade some parts of the buildings including the bedrooms which do not currently have a hotel rating. Room rates last weekend were offered online at €108.

Much of the impressive interior design likely to be retained includes the work of the Paris-based expert Miguel Cancio Martins whose portfolio includes Johnny Depp’s Man Ray Bar-Restaurant in Los Angeles, Paris and New York, The Valerie Night Club in Marbella and Raffles Hotel in Singapore.

The Dawson is a substantial hospitality complex with an overall floor area of 3,375sq m (36,327sq ft). Most guests will be familiar with Sam’s bar which extends to around 557sq m (6,000sq ft) and can cater for a substantial number of drinkers.

The location is undoubtedly one of the best in the city only a few minutes walk from St Stephen’s Green and Grafton Street as well as the newly evolving entertainment area between South William Street and South Great George’s Street.

Tom Barrett, head of hotels and leisure at Savills, said they were expecting strong international interest as well as Irish inquiries about The Dawson because of the scope to turn it into a high-class boutique hotel as well as a strong food and beverage outlet.

Tony Morrissey of Morrissey’s said the sale provided a “unique opportunity to acquire an unrivalled licensed premises with bedrooms and a spa”.