Total of 107,200sq m let in the first quarter, according to CBRE 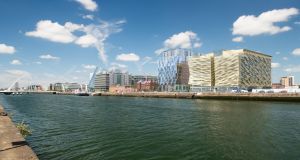 Three of the 49 transactions that completed in the first quarter extended to more than 9,290sq m (100,000sq ft) including pre-lettings to Salesforce and the Central Bank in the city’s north docklands.

Despite record office take up in the first quarter and Brexit concerns on the horizon, demand for office accommodation is continuing to rise strongly with technology companies among the biggest users of commercial property.

Even as existing office requirements are fulfilled, new requirements are continuing to emerge, according to property agents CBRE which noted that the volume of demand stood at more than 370,000sq m at the end of March.

Three of the 49 transactions that completed in the first quarter extended to more than 9,290sq m (100,000sq ft) including pre-lettings to Salesforce and the Central Bank in the city’s north docklands.

Ms Hunt added: “49 individual office lettings occurred in Dublin in the first three months of the year with 32 of these transactions being to Irish companies. UK companies accounted for 10 transactions in the period while there were 4 lettings to US companies.”

In total, the three pre-lets accounting for such a substantial amount of space in turn accounted for more than half of Dublin’s take up in the period. And while there was a significant volume of stock reserved at the end of March (150,000sq m), demand remained elevated with more than two thirds of requirements focused on Dublin city centre.

CBRE noted that there were 30 office schemes were under construction in the city centre at the end of March, extending to more than 370,000sq m.

But Ms Hunt noted that about 47 per cent of that has already been pre-let, “meaning that occupiers cannot afford to get complacent and put off location decisions in the hope that a large volume of stock will come available over the next two to three year period”.

Meanwhile, the overall vacancy rate in Dublin dipped to 5.39 per cent from 6.09 per cent this time last year, as did the vacancy rate in the city’s suburbs. Prime office yields remained stable at 4 per cent, although CBRE suggested they may compress in the coming months.

Am I paying too much for my buy to let mortgage? 17:43
Pat Phelan’s Sisu chain raises additional funds as it eyes US launch 17:33
Siemens’ $18bn energy spin-off falls in Frankfurt debut 17:30
Stripe takes part in major fundraising rounds for Stedi, PayMongo 17:26
Mortgage breaks will not be extended beyond this week 16:28

1 Former junior minister Michael D’Arcy did not contact ethics watchdog over new job
2 Mortgage breaks will not be extended beyond this week
3 Three Ireland switches on 5G network around the country
4 Pilita Clark: The looming legal minefield of working from home
5 Chris Johns: Boohoo exposed on pay and conditions in digital economy
6 Am I paying too much for my buy to let mortgage?
7 Pat Phelan’s Sisu chain raises additional funds as it eyes US launch
8 Stripe takes part in major fundraising rounds for Stedi, PayMongo
9 New car prices could rise by up to €10,000 if taxes increase in budget
10 State should use Covid-19 impact on building costs to build homes
Real news has value SUBSCRIBE