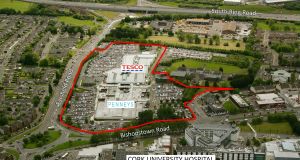 Wilton Shopping Centre in Cork: the most valuable asset in the portfolio.

The Dublin-based real estate firm Clarendon Properties headed by Paddy McKillen and Tony Leonard is expected to have a significant shareholding in a company selected as the preferred bidder to buy Wilton Shopping Centre in Cork and two provincial retail parks in Drogheda and Galway. Clarendon is also likely to become the portfolio’s asset manager.

The consortium, led by US hedge fund York Capital Management, has agreed to pay in excess of €120 million for the Nama-sponsored Hazel Portfolio which was offered for sale last September at €115m through joint agents Bannon and DTZ Sherry FitzGerald. The new owners can expect a net return of around 7.2 per cent on the investment which is producing a rental income of just under €9 million. The weighted average unexpired lease term for the portfolio is 9.11 years.

All three centres have a particularly low vacancy level, strong tenants and, unlike many of the portfolios offered for sale over the past year, are not burdened with excessively over-rented shops. The three centres have 92 tenants in all, occupying 37,800sq m (406,871sq ft) of retail space.

Wilton is by far the most valuable asset in the portfolio, accounting for more than €70 million of the agreed selling price. It is anchored by Tesco and Pennys and is seen by the investment market as rating second only to Mahon Point. Tesco owns its own store and more than a decade ago it also owned the Wilton Centre before selling it to two local property companies for a reported €124 million.

|Pennys pays the highest rent in the centre, €1,260,000, and has 17 years to run on its lease. The other prominent names in the centre include New Look, Sketchers, Lifestyle Sports, Boots and Easons. Wilton is producing a rent roll of more than €5 million from an overall floor area of more than 10,000sq m (107,638sq ft).

Drogheda Retail Park was valued at around €30 million in the run up to the sale. It has a rent roll of €2.5 million from 13 retail warehouses extending to 19,880sq m (214,000sq ft). The complex is one of three retail parks in Drogheda where the town centre has taken a severe drubbing because of competition from out-of-town traders.

The second retail park to be included in the sale, Gateway Retail Park in Galway, originally had a price tag of €15 million. It is located in a highly populated west Galway suburb and is expected to benefit from its close proximity to the planned new city bypass.

The park was developed by property veteran Michael Whelan and produces a rent roll of €1.4 million from B&Q, Next, New Look and McSharry’s Pharmacy. The present accommodation extends to 7,798sq m (83,936sq ft) and can be doubled in size on an adjoining 3.9 acre site with full planning permission for a second phase.

1 Brexit: System agreed for Irish goods to skip checks on UK trade
2 Why are markets booming when a crash is on the way?
3 How much do Irish people earn? And what will Covid-19 do to our wages?
4 Ireland faces 'deep downturn' this year and may not rebound until 2024 if there is a second wave
5 ‘The rental situation stops me moving back home’
6 Could your old car be giving away all your secrets to its new owner?
7 High Court appoints interim examiner to Compu b parent company
8 Supreme Court in Dublin clears Bernie Madoff Ponzi loss case for hearing
9 Second Covid-19 outbreak and no-deal Brexit an appalling vista
10 Former Worldspreads chief Conor Foley faces €730,000 fine
Real news has value SUBSCRIBE