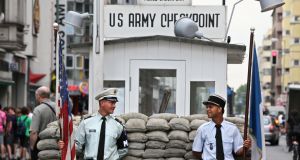 The Cannon bothers most high-profile purchase was in 2007 when they acquired development land at the Checkpoint Charlie site. Photograph: Getty

Dublin-based homebuilder Cannon Kirk is set to exit Nama, having secured financing from US private equity giant Oaktree to help repay its outstanding debt with the State’s bad bank.

Oaktree will take an equity stake in Cannon Kirk after agreeing to provide more than €100 million to the company to assist it in redeeming its Nama borrowings at face value and also give it capital for growth, according to a source familiar with the deal.

The source declined to give further financial details, including the size of the holding Oaktree is taking in Cannon Kirk or the level of the company’s indebtedness to Nama before the refinancing deal was struck.

Cannon Kirk, owned by Mayo brothers Michael and Cathal Cannon and developer Owen Kirk, has a pipeline of about 3,000 homes across schemes in the UK and Ireland that are due to commence in the next year, according to sources. While the company has been most active in England in recent years, where it has development sites in Cambridgeshire and Plymouth, its portfolio also includes sites in north Dublin, Kildare, Wicklow and Louth.

“Oaktree is a strong partner who has taken a long-term view on investing in Ireland,” according to Michael Cannon, chief executive of Cannon Kirk, in response to questions from The Irish Times. “They have recognised the need for housing in Ireland and we looking forward to growing the business and delivering much-needed supply to the market.”

The Cannon bothers most high-profile purchase was in 2007 when they acquired development land at the Checkpoint Charlie site, a border crossing between east and west Berlin during the Cold War, for €29 million. The purchase was financed by AIB loans that were later transferred to Nama.

The sites were subsequently sold two years’ ago for about €85 million to a German developer with the proceeds understood to have been used to reduce the company’s Nama loans.

Cannon Kirk sued Nama earlier this year over an alleged €15 million loans redemption “penalty” that the bad bank was planning to impose as the firm sought to refinance its borrowings elsewhere. It is understood the case was subsequently settled.

Oaktree has been one of the most active buyers of distressed Irish loan portfolios in recent years, most of which has ended up in an Irish vehicle known as Targeted Investment Opportunities.

In 2016, Oaktree bought two portfolios from Nama – Project Emerald and Project Ruby – which had a combined par value of €4.7 billion. The loans were secured mostly against commercial properties, including a number of apartment blocks in Dublin.

Oaktree also linked up with Nama and property company Bennett four years ago to develop land in Dublin’s docklands, including €450 million worth of offices and apartments on land near Facebook’s European headquarters.

1 Chris Johns: Ireland risks populist culture war over property and pensions
2 Inbreeding poses major threat to Ireland’s thoroughbred horse sector
3 Boeing identifies new software flaw in grounded 737 Max
4 ‘Life in Vilnius reminds me of Ireland in the 1990s’
5 Big spending election promises and Dublin hotel room taxes
6 Dublin housebuilder records €11m gain after striking deal with bankers
7 Irish people like nothing more than being bribed with their own money
8 GoMo is being investigated by advertising authority
9 The Irish economy is thriving but if you’re not feeling it – here’s why
10 When I’m 65: five ways you’ll benefit
Real news has value SUBSCRIBE