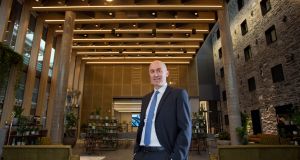 Dublin-listed property investment trust Hibernia Reit said its portfolio grew by 2.5 per cent in value to over €1.41 billion between October and December 2018.

In a trading update, the developer said that resulted in net asset value per share of 170.1 cent. That resulted in a final performance fee of €5.4 million and a base fee top up of €1.5 million is payable to executives, mainly in shares, once the company’s accounts are audited for the year ending on March 31st.

In the final quarter of 2018, Hibernia said demand for Dublin office space remains high, with the vacancy rate for prime space hovering at 4.6 per cent with rents stable at over €60 per sq ft.

During the period, Hibernia let 1 Sir John Rogerson’s Quay to Hubspot on a 20 year lease to begin in June 2019. That property is expected to be completed this month. Similarly, work at 2 Windmill Lane is due to finish soon and while no occupier has been found, “discussions with potential occupiers continue”.

In November, the company acquired 92.5 acres of land at Newlands Cross from the Irish Rugby Football Union (IRFU) for an initial fee of €27 million. The company didn’t dispose of any assets in the period.

In a separate announcement to the stock exchange, Hibernia announced that its chief investment officer, Richard Ball, will step down at the end of March 2019 to “pursue another opportunity”.

Edwina Governey, currently a senior investment manager, will be appointed to the role in an interim capacity.

By the end of last year, Hibernia had net debt of €205 million, a loan to value ration of 14.5 per cent and cash and undrawn facilities of €115 million.

The wealth of the Irish – how do your assets match up? 12:16
Commission ready to clamp down on sweetheart corporate tax deals 11:01
KBC Ireland fined €18.3m for ‘unconscionable’ tracker scandal role 11:00
JPMorgan Chase halts plans to bring back workers to London base 10:53
Women accounted for 60% Iseq board recruits in 2019 10:05