McCann FitzGerald is tenant in one of capital’s striking buildings 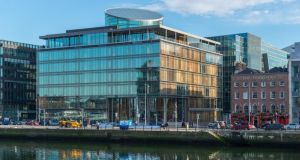 Riverside 1 on Sir John Rogerson’s Quay: both Irish Life and IPUT are believed to be interested in acquiring the office building in Dublin’s docklands area

The intense competition between investment funds for the best of the remaining property assets is set to reach a new height with the sale of a majority stake in the McCann FitzGerald office building at Sir John Rogerson’s Quay in the south Dublin docklands.

Savills is guiding €75 million for a 70.8 per cent share in Riverside 1 which is widely recognised as one of the most striking modern office buildings in the city.

The broad appeal of the investment stems largely from the confidence in McCann FitzGerald, a progressive company with a staff of more than 450, the rental security provided by the upwards-only lease with 16½ years to run and the fact that the existing rent of €484 per sq m (€45 per sq ft) is already below the going rate long before the next review in October 2016.

Aviva, which holds the remaining 29.2 per cent stake in Riverside 1, has neither preemption rights nor weighted voting rights. Dessie Kilkenny of Savills said that while part ownership was not an ideal scenario, those interested in the office building would take comfort from the fact that their future partner was a distinguished institution and professional investor.

McCann FitzGerald, originally based in the IFSC, acquired the high-profile site on Sir John Rogerson’s Quay when they were forced to find larger office accommodation to cater for the fast-growing legal practice.

The investment was sold to a private syndicate assembled by Derek Quinlan and funded by Anglo Irish Bank, subsequently IBRC and now Harcourt Life.

The price being sought for Riverside 1 equates to about €10,225 per sq m (€950 per sq ft), only marginally ahead of the €10,177 (€940 per sq ft) paid recently by German bank fund Union Investment for the Facebook buildings at 4 and 5 Grand Canal Square. The Riverside 1 valuation could well fall short of the €10,763 per sq m (€1,000 per sq ft) which is understood to have been offered for the Anchorage building close by in the south docklands.

The recent settlement of a rent of €645 per sq m (€60 per sq ft) for the office block on St Stephen’s Green being developed by businessman Denis O’Brien is also expected to trigger a new round of rent increases at the upper end of the market.

Who is likely to buy Riverside 1, a block frequently spoken of as possibly the best office building in the city? Irish Life and IPUT are known to have an interest in it along with Hines, JP Morgan and Union.

Fergus O’Farrell and Dessie Kilkenny of Savills say they expect a “wide variety of investor types” either seeking to expand an already established property platform in Ireland or those seeking to enter the market for the first time.

The unrivalled lease term, upwards-only reviews and a strong rental market which investors in Riverside 1 could benefit from with the 2016 rent review offer investors an opportunity for a core office investment not seen in this cycle.

A tale of two pandemics for Smurfit Kappa and Greencore 11:31
Same Brexit stumbling blocks persist as Barnier travels to London 10:48
Spain’s BBVA and Sabadell scrap merger talks 10:33
Over 100 Kepak workers test positive for Covid-19 in Cornwall 10:17
Oxford-AstraZeneca vaccine may be trialled again to prove results were ‘not a mistake’ 09:54

1 Anti-alcohol zeal of public health experts peppers reopening debate
2 White knights or loan book cannibals – what will happen at Ulster Bank?
3 Admission of mistake in Oxford vaccine dose raises doubts over reliability
4 AIB revives €1bn-plus problem mortgages sale
5 Oxford-AstraZeneca vaccine may be trialled again to prove results were ‘not a mistake’
6 Move to EU or face disruption, City of London is warned
7 John FitzGerald: What kind of banking system do we want?
8 Brexit: Shipping lines will set up new routes to Europe to meet demand, says State agency
9 Same Brexit stumbling blocks persist as Barnier travels to London
10 Karlin Lillington: How I managed to cut my mobile phone bill by at least half
Real news has value SUBSCRIBE