Carrickmines block expected to bring in over €15 million 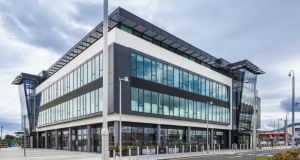 The Iveagh Building, near The Park in Carrickmines, Dublin.

The new commercial property season gets under way today with the planned sale of a successful retail and office block at The Park in Carrickmines, Dublin 18, which is expected to make in excess of €15 million.

The Iveagh Building is well located alongside The Park, one of Ireland’s busiest retail parks which was acquired last October by the IPUT property fund for about €78 million.

The wide-ranging retail facilities, along with a significant office element, were developed in the mid-2000s by Michael Cotter’s Park Developments.

Warren PrivateClients and AIB Private Banking bought the first phase of the park in 2006 for about €100 million. A year later, it paid almost as much again for the second phase.

The four-storey-over-basement building now going for sale has seven retail units on the ground floor and fully occupied office space on the upper floors which are producing an overall rent roll of €977,985.

The top floor of the block has already been sold off separately. The overall floor area extends to 3,920sq m (42,200sq ft) and includes 148 basement car parking spaces.

Vodafone’s eight-year lease runs from last May and includes a break option in 2018.

Vodafone is paying in the region of €950 for car parking spaces.

Marguerite Boyle of Savills said the well-diversified and fully let property was at an accessible ticket size for both private and institutional investors.

“Due to the strong occupier demand, well-serviced location and good tenant line-up, we anticipate a strong level of interest in the investment.”