CIÉ pension deficit up to almost half a billion euro 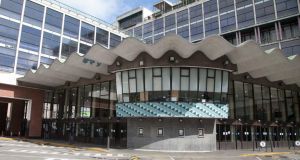 Bus Áras, Dublin: CIÉ defended its board member and Bus Éireann chairman Paul Mallee who, it recently emerged, is based in Dubai and attended seven of 12 board meetings last year. Photograph: Gareth Chaney Collins

The deficit in CIÉ’s defined pension scheme grew substantially in 2012 and now stands at almost half a billion euro.

This is due to a 1.4 per cent reduction in the discount rate of the scheme, which is directly linked to poor commercial bond investment performance last year and which affects schemes in general.

According to its annual report, published yesterday, the deficit grew from almost €160 million at the end of 2011 to around €492 million in 2012.

The value of the pension scheme assets have risen to €1.45 billion from €1.34 billion.

Yesterday’s publication followed revelations that the transport company, which comprises Bus Éireann, Iarnród Éireann and Dublin Bus, would have incurred a deficit of €45 million for the year had it not been for a government subvention.

“While both revenue and passenger journeys stabilised in 2001, the focus on cost reduction continued during the year,” it said. “Costs were reduced by €8.8 million in 2012, bringing to €66.8 million or 15.8 per cent the cumulative annualised cost savings achieved since 2008.”

The situation was not much healthier at Bus Éireann, which ran a deficit of €6.2 million. It said that the ongoing recession and related reduction in customer demand had continued to cause difficulties to the company.


Dublin Bus
Dublin Bus incurred a deficit of €3.8 million last year, although this was down substantially from a figure of €18.2 million the previous year. It received a once-off subvention of €5.3 million.

“The key aspects of the financial results include revenue growth of €12.7 million and further cost reductions of €8.3 million,” it said.

“Customer demand was considerably more stable in the latter end of the year and revenue growth was achieved for the first time since 2008.”

Things looked more positive at CIÉ Tours International, which grew revenues by 5.9 per cent to just over €50 million.

CIÉ defended its board member and Bus Éireann chairman Paul Mallee who, it recently emerged, is based in Dubai and attended seven of 12 board meetings last year.

The firm said he had taken part in four meetings via conference call and missed one due to unforeseen circumstances.

1 Coronavirus: How the Covid-19 crisis may reshape air travel
2 Euro zone deal explained: Breaking down the detail of the €500bn funding
3 Singapore halts use of Zoom for home-schooling after hack reports
4 Euro finance ministers agree €500bn package to address pandemic fallout
5 Dutch go out on limb in fractious negotiations on aid for fellow EU states
6 Racing DNA helps scientist make strides with speed gene
7 ‘In Austin, there just seems to be something for everyone here’
8 Cut price chocs: Swiss chocolate makers offer discounts to stem weak demand
9 BlackRock chief Larry Fink receives 5% pay increase
10 The best business books to get you through the lockdown
Real news has value SUBSCRIBE