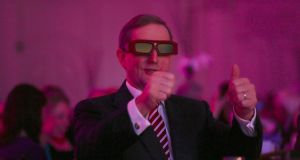 The reappearance of 3D may seem strange to those of us who remember watching trashy movies wearing blue and red glasses in the 1980s. But advancements in the field have made the technology sexy again.

At The Irish Times InterTradeIreland Innovation Awards last week, 3D was front and centre, being overshadowed only by the 4D appearance of Taoiseach Enda Kenny.

3D printing was on view courtesy of Dave Head of 3D Dave. Using his Ultimaker fused deposition modelling (FDM) printer, Head applied heated plastic layers – one on top of the other – to create a plastic version of one of the event’s awards.

Head’s Dutch-designed flatpack Ultimaker is one of the top-selling small 3D printers. Its main rival is the US-made MakiBox, but the market has exploded recently.

“Three years ago when I started out there were only four or five companies, and those two stood out the most,” says Head. “Now there’s so many others, all replicating the same thing. The cost has reduced dramatically in recent years. It’s possible to buy a basic 3D printer for around $250.”

The Institute of Technology in Tallaght has the State’s only 3D sintering machine, which prints in metal and nylon powder, and set the institute back €250,000. The ability to print in metal creates many possibilities.

“Nasa has been using it on its rocket-engine nozzles and has made them more efficient, and Boeing is using it to make hinges for aircraft, making them both lighter and stronger,” says Head. “There’s even people making fully printed car bodies now.”

The event itself was broadcast in live 3D, a first in Ireland. This joint experiment was made possible by Dr Gary Baugh from Trinity College Dublin’s Sigmedia research group and Colin Norris of production company Media Coop.

Pairs of high-tech 3D glasses were on each table – one for everyone in the audience. Unlike The Late Late Show, however, we were not allowed to take the 3D glasses home with us, as noted by the event’s host, Matt Cooper, on numerous occasions (too expensive unfortunately).

“We have made it possible to see the presenter, Matt Cooper, on stage in 3D, as well as all the 3D content being presented on screen,” says Baugh.

“It’s similar to the cinema experience but in that case it’s pre-recorded. This is the first time live 3D has been attempted.”

There is no point having an awards ceremony celebrating innovation without taking a few risks. “It was very exciting and a little scary because of the number of new challenges,” says Norris of Media Coop.

“The filming side is more complicated and you have to be very careful about how you approach it. You’re using two cameras at once, meaning twice as much technology involved and twice as much processing at the very end.”

U2 have done concerts in live 3D in the past, and live 3D has been used in other entertainment settings. But the technology has more practical applications too.

“We’re engaged in a project with the Royal College of Surgeons in Ireland, where we film doctors doing dissections of cadavers in 3D,” says Baugh.

“When students watch a 3D dissection of a cadaver, it’s easier to understand the anatomy. The geometry is much more realistic than watching a 2D video. In any demonstration where the scale and size of objects is important, this technology could be useful.”

8 The trillion dollar question: what does a trillion look like?

9 Can I see copies of earlier wills my mother wrote?