Lesson plan: How we built the app Spotify bought 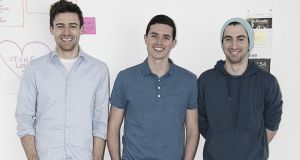 Soundwave founders Brendan O’Driscoll, Craig Watson and Aidan Sliney: Their app tracks what songs people are listening to on their smartphones.

Brendan O’Driscoll, Aidan Sliney and Craig Watson founded Soundwave in 2012. Their music-discovery app tracks what songs people are listening to on their smartphones and where in real time, and share that with friends. The company was acquired by Spotify (the music streaming service) earlier this year. Brendan O’Driscoll shares his start-up story:

1. Tell me about how Soundwave started? A couple of years ago I was living in Sweden and Aidan was living in Dublin, and we used to keep in touch a lot over Skype. Time and time again, we reverted to the same topics: the books we were reading, films we were watching, and music we were listening to.

Around that time as well, there was that explosion of people wearing big headphones, and those headphones were plugged into smartphones. We remarked one day that it was funny that smartphones were the most connected devices in the world, but for some reason my smartphone couldn’t tell Aidan’s smartphone what I was listening to and vice versa.

We knew it was something we were interested in because we were already verbally communicating our favourite artists, songs and albums of that day or week, but thought it should be a lot easier to do that. From that simple idea, we went online and found thousands of chat rooms of people typing in the name of the songs they were listening to. From there, we saw it wasn’t just a problem we had, but lots of people constantly trying to communicate what they were listening to to their friends.

2. How did it go from an idea to a business? We took that concept and Aidan, with his technical background, built a very rough, early prototype of how Soundwave could work. From there we went to the NDRC (previously known as the National Digital Research Centre) where we earned our stripes. We met our third founder Craig Watson there.

3. What were the challenges you faced in the early days and how did you overcome them? We spent a good bit of time fundraising, which gave us enough money to get going and build the team. That’s where the operation really kicks in, trying to manage a team of that size.

4. What was the best advice you got? Listen to everyone’s advice, but ultimately remember that the decision is down to you.

5. What was the worst advice you got? Bring in a battle-hardened exec because we were too young and inexperienced to figure out what to do. No!

6. How has life changed since Spotify for you? I’ve been really enjoying my time at Spotify leading strategic integrations. We recently launched a powerful integration with Tinder that allows users to showcase their top tracks on their Tinder profiles. This gives everyone a great conversation starter, post-match as well as giving people another reason to swipe right (or left depending on the other users music tastes!).

7. How would you advise start-ups to fund their business in the early days? I think it’s best to bootstrap until you can validate the concept and have a good comprehension of the business model. From there, accelerators are great places to nurture the start-up and receive some additional funding. Then, depending on the growth trajectory and type of business, it’s good to begin syncing with the local angel and venture capital community and lay the foundations for a potential investment. This is time well spent, outside of the potential for additional investment, as you will start to learn what’s working and what’s not from talking to so many different investors about your vision.