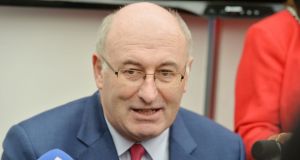 Phil Hogan: in a speech to the European Parliament he said European producers had to share responsibility for the continuing glut in supply, which has seen milk prices fall by more than 40 per cent since 2014. Photograph: Alan Betson / The Irish Times

One of the State’s leading dairy lobby groups has taken issue with European Agriculture Commissioner Phil Hogan for suggesting that European dairy farmers were partly responsible for the current market slump.

In a speech to the European Parliament, Mr Hogan said European producers had to take their share of responsibility for the continuing glut in supply, which has seen milk prices fall by more than 40 per cent since 2014.

However, the Irish Creamery Milk Suppliers’ Association (ICMSA) claimed the commissioner was completely wrong in attempting to “make farmers responsible for the dairy farmer income wipe-out when the blame for the current crisis lay squarely with the EU Commission, individual national governments and processors.”

“The reality is that individual farmers are being forced to produce more and more in an effort to simply try and stand still and unless their processor decides to implement a voluntary supply reduction scheme, the farmer simply has no other option,” said ICMSA boss John Comer.

The processors simply wanted to get more milk for their processing plants and the position of farmer-suppliers was absolutely secondary to that consideration, he said.

Mr Comer noted that farmers had repeatedly been promised action from the Commission to correct the power of the multiple retailers.

“Since the start of 2014 farm-gate milk prices are down by over 40 per cent while the prices paid by consumers for dairy products have fallen by approximately 2 per cent. The farmers’ margin has been decimated and has been gobbled up by the stronger links further along the supply chain,” he said.

In his address to the parliament, Commissioner Hogan acknowledged the difficulties being faced by dairy farmers, describing the situation in the dairy sector in virtually every member state as “acute”.

However, he noted that the lifting of quotas last year had led to significant production increases in Ireland, Cyprus, Luxembourg, Belgium and the Netherlands.

“Producers have to take their share of responsibility in terms of bringing about balance in the market place between demand and supply,” Mr Hogan said.

The Commissioner said he was proposing to double the state aid ceilings which would facilitate voluntary cuts in production under article 222, which allows member states bypass European competition rules.