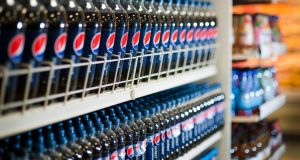 PepsiCo has said it’s on track to achieve $1 billion in productivity savings this year. Photograph: Bloomberg

PepsiCo, the soft drink maker and world’s largest snack producer has posted first quarter profits that topped analysts’ estimates after cutting costs and boosting sales of its Frito-Lay line in the US.

The average of analysts’ estimates was 79 cents. Chief executive Indra Nooyi, after fending off activist investor Nelson Peltz’s attempt to split up PepsiCo’s snack and beverage units, is working to prove the company is better off with the businesses together.

The company has said it’s on track to achieve $1 billion in productivity savings this year.

“We have generally been encouraged by improvements in PepsiCo’s beverage business and ongoing solid results in snacks,” Bonnie Herzog, an analyst for Wells Fargo noted.

The shares rose in early trading today. PepsiCo had gained 2.9 per cent this year through Wednesday’s close, compared with a 2.4 per cent advance for the Standard and Poor’s 500 Index.

Can I see copies of earlier wills my mother wrote? 05:59
High-rise housing debate between Ronan and McDonald falls flat 05:41
Stocktake: Ordinary investors in full bull mode 05:40
Dublin’s post-Covid recovery should be a matter for national debate 05:30
Stocktake: Timing the rotation into value stocks 05:30

7 How affordable is housing for first-time buyers?