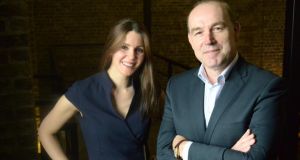 Mr Browne was previously the managing director of Wyeth Pharmaceuticals in Ireland, before going to to become regional president at Pfizer. He then oversaw the integration of Pfizer nutrition into Nestle.

Nuritas said Mr Browne played a key role in overseeing, preparing and delivering the sale of Pfizer Nutrition to Nestle for €11.85 billion in the world’s biggest healthcare deal of 2012.

“We believe his appointment will be instrumental in the growth and success of our company’s vision of creating healthy, sustainable, and affordable products for everyone and ensuring that Nuritas becomes a key player on the global food stage,” the start-up said.

Nuritas has developed a proprietary technology using big data techniques, which sieves through large amounts of data, to discover natural, life-changing ingredients from food and food by-products for use in the functional and medical food, personal care, and nutritional supplement markets which combined are currently estimated to be worth around €200 billion.

Last year, Nuritas announced it had discovered an MRSA killing peptide. The peptide, which is derived from a food by-product, is anticipated to provide a natural, healthy innovation in the fight against antibiotic resistant infections in both humans and animals.