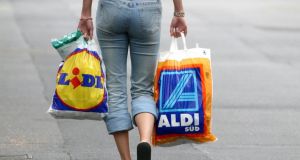 Lidl and Aldi face growing pressure to pay milk suppliers in the Republic more after they last week agreed to pay UK farmers a minimum of 28p a litre, up from an average of 23p. Photograph: Ulrich Baumgarten/Getty Images

Discount retailers Lidl and Aldi have failed to specify whether they will pay increased prices to milk suppliers in the Republic following similar moves in the UK.

Last week, both retailers bowed to pressure from UK farmers by pledging to pay a minimum of 28p a litre, up from an average of 23p.

This follows months of protests by farmers who have seen their margins eroded by a global slump in dairy prices.

In the Republic, where liquid milk only accounts for about 10 per cent of the market, farmers have so far directed their ire at the Government and the European Commission, seeking direct EU intervention to support prices.

The Irish Creamery Milk Suppliers Association (ICMSA) yesterday, however, opened up a new front, calling on Lidl and Aldi not to differentiate between Irish and British suppliers in the wake of their pledges around minimum prices in the UK. It claimed the average price paid to suppliers in the UK was now significantly higher than here.

The ICMSA’s Pat McCormack said the moves by Aldi and Lidl in the UK also had implications for Dunnes, Supervalu and Tesco, which dominate the Republic’s retail trade.

“The milk price to farmers has fallen by about 35 per cent in a year but has not fallen to the consumer by a single cent so the retail multiples have obviously ‘gobbled up’ the farmers’ margins and are now in the position where they seem happy to watch milk suppliers actually losing money on producing the milk on which they – the supermarkets – are now taking an even bigger margin,” he said.

Aldi Ireland vehemently denied it was profiting on the backs of farmers, claiming it paid its three milk processors in the Republic above the market price for liquid milk. “We offer our milk processors fair prices based on an annual tender process. Agreements reached are honoured and the prices we settle on remain consistent throughout the term of the contract,” a spokesman said. A Lidl Ireland spokeswoman said the retailer would not be commenting.

Tesco and Musgrave, which owns Supervalu and Centra, meanwhile, said they source milk through milk processors who agree farm gate prices with their producers.

A glimmer of light emerged yesterday for farmers, however, with the latest Global Dairy Trade auction posting the first rise in prices in six months. IFA’s national dairy chairman Sean O’Leary said the auction signalled a bottoming out of markets, describing it as a “line in the sand for farmers”.