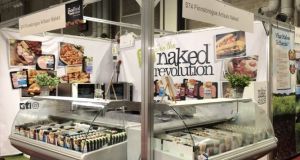 A Finnebrogue Artisan stall at a trade exhibition. The company was founded by Denis Lynn more than 30 years ago, and today has an annual turnover or more than £90m

Finnebrogue Artisan, a Downpatrick-based food manufacturer, plans to create 125 jobs in the North to expand production of its nitrite-free bacon products.

The company has invested £17 million (€19.7m) in a new production facility in Downpatrick, Co Down, and is hoping to grow sales of its Naked Bacon products to £23 million by 2022.

Finnebrogue, one of the North’s fastest growing food companies, was founded by Denis Lynn more than 30 years ago, and today has an annual turnover or more than £90 million.

Mr Lynn’s passion for food innovation has made him one of the most successful entrepreneurs in Northern Ireland. He started off with venison products and then expanded to produce pork, lamb and beef sausages.

In recent years he has turned his attention to bacon but the now chairman of Finnebrogue Artisan said he was determined not to “make a single rasher of bacon until we could figure out a way to make it better and safer”.

“It has been known for decades that nitrites used in curing meat can cause cancer,” he said. “We always set out to make food the best it can be, without being bound by the way it has always been done.

“And so, after much research, we discovered a process that uses fruit and spice extracts to flavour the pork, keep it pink and retain shelf life. We are using this technology in our Naked Bacon, and we’ve had a great response from both retailers and consumers.”

The company began production of its Naked Bacon products last year in Downpatrick, and with £1.3 million of financial support from Invest NI and a new production facility in place hopes to expand production and grow its sales.

Brian Dolaghan, executive director of business and sector development with Invest NI, said Finnebrogue’s nitrite-free bacon has “been welcomed by top food scientists as a significant advancement in food safety and has already found a market among health-conscious consumers”.

In January, Finnebrogue invested £3 million in a vegan and vegetarian factory which is expected to create 90 jobs. It hopes to grow this to a £30 million a year business.