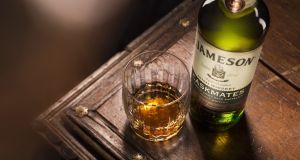 Jameson Whiskey continues to grow in popularity and has now become one of the top 50 leading spirits brands in the world, according to a new survey.

The Irish Distillers-owned brand, which is Ireland’s most popular whiskey with sales of over five million cases annually, saw volumes rise 8.9 per cent globally last year, pushing it into 49th place in International Wine and Spirits Research (IWSR) list of top alcoholic drinks. This compares to 55th place last year and 61st in the 2014 ranking.

Jameson is one of two Irish brands included in the global rankings with the Diageo-owned Baileys climbing two places to claim 37th spot with sales of 6.2 million last year.

The South Korean vodka brand Jinro Soju remains by far and away the biggest spirits brand in the world with two other soju brands also included in the top ten. Jinro sold an additional 425,000 cases last year, surpassing 65 million cases in total.

The Real 100 list highlights the importance of emerging markets in terms of sheer volume size in the global spirits market, which grew by 0.5 per cent last year. Leading brands from India,Japan and Brazil together accounted for over a third of the brands making an appearance in the rankings.

Even more evident from the list is the dominance of local whiskies and other local spirits brands, including cane, cachaça and soju/shochu, which far outnumber brands from more internationally facing categories such as Scotch whisky or gin.

Climbing into second place in this year’s list is the Indian whisky brand ABD’s Officer’s Choice, which saw the largest volume growth of all top 100 brands in 2015, with an additioanl 4.5 million cases sold, surpassing 34 million overall.

The first international brand to appear on the Real 100 list is Smirnoff vodka, which overtook another Diageo brand McDowell’s whisky to become the fifth-largest global spirits brand and which remains the largest-selling vodka worldwide. With a 2.7 per cent increase on 2014 volumes, global consumption of Smirnoff reached a new record high, climbing to 26.5 million cases last year.

A third Diageo brand, Johnnie Walker, also retained its place in the top ten despite recording a flat year in terms of volume growth.