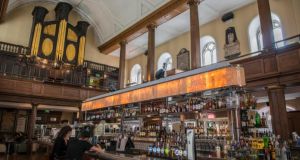 Arthur Guinness was married in St Mary’s Church before it was deconsecrated in the 1980s. It is now trading as The Church and employs 70 people. Photograph: Brenda Fitzsimons / THE IRISH TIMES

The Church Café, Bar and Restaurant, a 17th century former church in Dublin’s north city centre, is to remain under its current owner following a successful refinancing of the venue’s debt with Ulster Bank.

Earlier this year it was disclosed that British pub chain JD Wetherspoon had set its sights on St Mary’s church,a historic venue where Arthur Guinness was married before it was deconsecrated in the 1980s.

Wetherspoon, which operates more than 900 outlets in Britain and Northern Ireland, opened its first pub in the Republic, the Three Tun Tavern, in Blackrock, Co Dublin during the summer. The chain plans to open 30 outlets across the State and has secured pubs in Cork, and Dún Laoghaire and Swords, in Dublin.

However, today’s announcement means that The Church will be retained by its current owner, Irish publican Brendan Flynn, after he struck a refinancing deal with Ulster Bank.

In addition to the new banking relationship with Ulster Bank, The Church has also strengthened its relationship with beverage company and drinks distributor C&C Gleeson . The Church has signed a long-term multi-beverage agreement under which C&C Gleeson will supply the business with effectively all of its beverage requirements from beers, ciders, wines, spirits to soft drinks.

“We are proud to partner with Ulster Bank and C&C Gleeson. These relationships have enabled us to end a period of uncertainty and allow us to focus on the continued investment in and development of Dublin’s leading landmark Café, Bar and Restaurant,” Mr Flynn said, adding that the re-financing is “excellent news for both the staff and the local community as the venue will continue to prosper as an Irish family run business”.