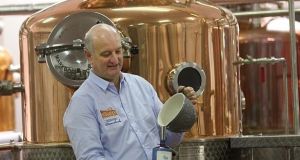 The maker of Drumshanbo Gunpowder Irish Gin has reported profits of €1.78 million for 2018.

“This is a long-term business and one that is very demanding on cash so every bit of money we make is going back into the distillery. We need to be making this kind of return at the very minimum to grow the business into a global brand,” distillery owner Pat Rigney said.

The company recently installed a new still and built a bottling facility at its Leitrim distillery, and is working on a new €2 million visitor experience centre that is due to open early next year. In addition, it is continuing to lay down whiskey stocks ahead of the launch of its first brand in early 2019.

The Shed Distillery intends to produce about 25,000 litres of whiskey a year initially, with the first batch of stock having been laid down in December 2014.

Its flagship product however, is Drumshanbo Gunpowder Irish Gin, which reached a major milestone in 2018, selling more than 100,000 cases and boosting turnover to more than €7 million.

The drinks maker more than doubled its 2017 exports of the gin last year and sold over €4.5 million worth of product across 30 international markets including the UK, US, Russia, Australia, Israel, India, South Africa and Iraq.

“We’re very proud of what we’ve achieved to date but I can assure you that the market we’re in is very dynamic and super-competitive so it is very important that we stay ahead of the game,” said Mr Rigney.

He said that the Republic, the UK and US, continue to be key markets for the Shed but added that travel retail was also important.

“Bit by bit we’re also making inroads in France, Spain, Eastern Europe, Australia and Scandinavia and I think it is very important that while we have lead markets that we also have strong second- and third-tier ones as well,” the businessman added.

Mr Rigney is an industry veteran with more than 30 years’ experience in the drinks sector. Having previously worked in lead roles at Gilbey’s, C&C and Baileys, he is credited with having introduced a number of spirit brands to the market, including Sheridan liqueur and Boru Vodka. The latter came via the Roaring Water Bay Spirits Company, which later merged with Great Spirits to form Castle Brands.

Mr Rigney is also co-founder of the Dalcassian Wines and Spirits distribution company, and an investor in Walsh Whiskey, whose key brands are The Irishman and Writers Tears.

1 Brexit: System agreed for Irish goods to skip checks on UK trade
2 Why are markets booming when a crash is on the way?
3 David McCullagh announced as co-host of RTÉ Six One News
4 Vodafone to speed up 5G rollout using new technology
5 Power, legitimacy, urgency make potent shareholders
6 Stocktake: Playing poker with the day traders
7 Providence shares rise as Barryroe expert joins board
8 Ireland faces 'deep downturn' this year and may not rebound until 2024 if there is a second wave
9 ‘I sometimes wonder if New Yorkers know how to relax’
10 Why UK supermarkets are not making super profits
Real news has value SUBSCRIBE