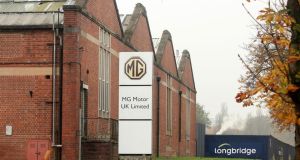 A view of a former entrance and sign at the MG Rover cars plant in Longbridge, Birmingham. Deloitte has been fined £14 million by the industry watchdog over “persistent” failings in its dealings with the collapsed car manufacturer.

Deloitte, one of the “Big Four” accountancy firms, has been fined a record £14 million (€16.6 million) for failing to manage conflicts of interest in relation to its work as corporate adviser for companies involved with collapsed British carmaker MG Rover Group.

The punishment surpasses the previous highest financial penalty of £1.4 million levied against PricewaterhouseCoopers in 2012.

Reporting council
Britain’s Financial Reporting Council (FRC), which brought the case against Deloitte, said an independent tribunal had also backed its call for a “severe reprimand” of the firm.

Paul George, the council’s executive director of conduct, said the final report of the tribunal provided a clear analysis of the case and how it reached its conclusions.

The tribunal ruled that Deloitte and Maghsoud Einollahi, a partner at the firm, failed in their duty to consider the public interest sufficiently in advising MG Rover and the “Phoenix Four”, four businessmen who bought MG Rover from BMW for £10 in 2000.

“It should be essential reading for all members of the profession. The sanctions imposed are in line with the FRC’s aim to ensure penalties are proportionate and have the necessary deterrent effect to prevent misconduct and bolster public and market confidence,” said Mr George.

In July, the tribunal found that all 13 allegations the council had brought against Deloitte were proven.

The fine was below what the FRC wanted. The council, which has been given stronger sanctioning powers after being criticised for being too lenient in the past on accountants, had sought fines of between £15 million and £20 million.

Deloitte said it disagreed with the tribunal’s main conclusions and said it could have negative implications for the advice that can be provided by firms and members of the Institute of Chartered Accountants in England and Wales.

“The quality of our work, carried out more than 10 years ago, has not been criticised, but the tribunal found against us on a number of points,” Deloitte said in a statement.

It has 28 days to decide whether to appeal.

Phoenix Four
The Phoenix Four extracted more than £40 million from MG Rover before it collapsed in 2005 with debts of about £1.3 billion – causing 6,000 workers to lose their jobs – after China’s Shanghai Automotive Industry pulled out of talks to invest in the business.

Mr Einollahi was fined £250,000 by the FRC and banned from the profession for three years. – (Copyright The Financial Times Limited 2013/ Reuters/Bloomberg)