Collapse in dairy prices may persist ‘for another nine months’ 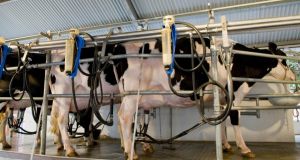 The current slump in milk prices may last another nine months, the chief executive of Lakeland Dairies has warned.

Michael Hanley said global market conditions were weak due to the oversupply of milk worldwide and would remain so for some time.

Speaking at an event in Co Cavan, he called on the EU to intervene directly to support prices, which have been on a downward spiral since the middle of last year.

“Prior to the abolition of milk quotas last April, the overall global market trend was already downwards. The situation worsened considerably due to the Russian ban on EU dairy imports,” Mr Hanely said.

“Unfortunately the EU failed to recognise the impact that these combined market and geo-political issues would have on the dairy sector,” he said.

The crisis has prompted several calls from stakeholders here, including the Minister for Agriculture Simon Coveney, for a rise in the EU intervention price for milk. So far EU agricultural commissioner Phil Hogan has resisted, insisting the market signals must be obeyed.

Last week, supermarket chains in the UK pledged to pay a minimum price of 28 pence per litre.

This followed months of protests by farmers with cartons being removed from shelves and cattle being herded down supermarket aisles .

Retail chain Morrisons has launched a brand of dairy products to support dairy farmers, while Aldi and Asda pledged to pay a minimum price of 28p per litre. Tesco and Sainsbury’s have so far ruled out a similar move to Morrisons, saying that they pay a fair price based on the cost of production

On Sunday night, however, tractors and protesters blockaded one of Tesco’s biggest distribution centre, as well as a Farmfoods depot near Avonmouth, Bristol.

In the Republic, where liquid milk market accounts for a much smaller part of the industry, the average price paid per litre is currently 34 cents.

However, Irish Farmers’ Association (IFA) maintains producers need a price of about 40 cents to cover their costs. So far, supermarkets here have not been the target of protests.

“As a co-operative, our mission is to support dairy farmers to the maximum possible. Our initiatives will ensure our ability to compete forcefully on global markets where we export milk in the form of value-added dairy foodservice products and food ingredients.”