Group to place shares with limited number of institutions 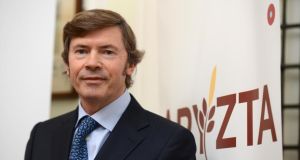 The Swiss-Irish convenience food group Aryzta plans to sell more than half its shares in agri-services business Origin Enterprises to institutional investors.

In a statement yesterday the group said it intends to offer up to 49 million shares in Origin by way of an accelerated book-building process to a limited number of institutional investors with immediate effect.

Book building is a means by which companies establish what price investors are likely to pay for a particular share or security.

Aryzta currently holds 85.3 million shares in Origin, representing 68.1 per cent of its issued share capital. It pledged to enter into a lock-up arrangement for 120 days following the completion of the placing.

IAWS Group established Origin in 2006 to focus on its agri-services and food businesses. It owns fertiliser manufacturer, Gouldings and animal feeds supplier, R&H Hall, as well as an agricultural advisory service. It also has a stake in Valeo Foods, owner of Irish brands such as Jacobs and Fruitfield.