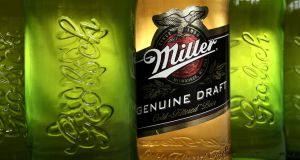 Anheuser-Busch InBev, the world’s largest brewer, launched an improved offer for SABMiller on Wednesday, offering just over £68 billion ($104 billion) for its largest rival to extend its reach into Africa and other markets.

The company said in a statement it was offering £42.15 per SABMiller share, having already made two prior offers at £38 and £40 .

AB InBev said it believed the offer would be attractive to SABMiller shareholders, adding it was disappointed the UK-based company’s board had rejected both previous approaches.

The company also added an alternative to the cash offer of partial payment in shares, although AB InBev said it would limit this to 41 per cent of SABMiller stock and is primarily designed to suit the British brewer’s major shareholders Altria and the Santo Domingo family.

Under this offer shareholders would get £2.37 a share in cash plus 0.48 special unlisted AB InBev shares which are convertible into ordinary AB InBev stock after a five-year lock-up period.

AB InBev said it expected most SABMiller shareholders would accept the all-cash offer and could re-invest their proceeds in its listed ordinary shares.

Top shareholder Altria, the tobacco group which has 26.56 per cent of SABMiller, promptly said it supported the bid and would be prepared to opt for the share alternative.

AB InBev’s chief executive, Carlos Brito, told a conference call that he also expected support from the Santo Domingo family, which holds a 13.9 per cent stake through their company BevCo, according to Thomson Reuters data.

The merged group would be a brewing colossus making nearly a third of all beer consumed worldwide.

It would add Africa and certain Latin American and Asian breweries to AB InBev’s extensive presence across the Americas and add SABMiller’s Peroni, Grolsch, Pilsner Urquell and other international brands to AB InBev’s existing line-up which includes Budweiser, Stella Artois and Corona.

Africa is expected to see a sharp jump in the legal drinking age population in the years ahead as well as increased beer consumption among a fast-growing middle class. In western Europe and North America beer volumes have steadily declined in the past two decades and US consumers in particular have shifted to craft brews made by independent players.

AB InBev said it intended to establish a secondary listing and regional headquarters in Johannesburg.

Analysts see this merger as the end-game of consolidation in brewing with the big four - AB InBev, SABMiller, Heineken and Carlsberg - already present across the globe and brewing more than half of the world’s beer.

SABMiller was not immediately available for comment and AB InBev said it had not yet received a response.

1 Deliveroo branches into grocery deliveries in Ireland
2 Coronavirus: The online scams, apps and trends you need to know about during the pandemic
3 Lockdown exit: How can Irish economy reopen without big health risks?
4 Property market has not felt full impact of Covid-19, warns Sherry FitzGerald
5 Amazon cargo aircraft using Belfast airport for North’s online market
6 I want to change my will quickly in case I fall ill. Do I need a lawyer?
7 Cold water poured on idea of ‘helicopter money’
8 EU ministers fail to agree virus economic rescue in all-night talks
9 Hey robot, do the vacuuming now
10 Half of Irish SMEs expect revenue to fall by at least 60% in next three months
Real news has value SUBSCRIBE