190 years of keeping it in the family

Shoemaker Clarks has reinvented itself, fought off take over bids and skirted bankruptcy while remaining a family-owned business 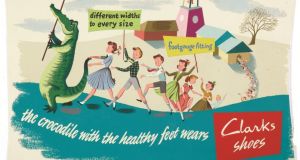 An advertisement for Clarks from a bygone era

“Keeping it in the family” doesn’t conjure up the image of dynamic and innovative enterprises and nor do the figures on family- run companies.

According to a study by McKinsey & Company, only 5 per cent of family businesses continue to create shareholder value beyond the third generation.

But iconic British shoemaker Clarks has bucked the trend and is in its seventh generation of family ownership.

The firm was established in 1825 by Quakers in Somerset, and the family still retains 80 per cent ownership almost 190 years later.

Today, the footwear company has reinvented itself, shaking off the image as a brand for pensioners and children, to appeal to a wider market. Last year it sold 50 million pairs of shoes, with a record turnover of £1.4 billion.

So how did a family company with Quaker roots, a religion concerned with social reform and pacifism, develop into an innovative global business?

Quaker family businesses were common in the 1800s. As only practising Anglicans could apply to study for degrees, many Quakers turned to enterprise.

Today there’s an impressive list of businesses with Quaker roots as Cadbury, Rowntree, Fry’s, Bewleys, Bryant & May matches, Huntley & Palmers and Carrs biscuit firms as well as banks Barclays, Lloyds and the financial institution Friends Life can all trace their origins to Quaker families.

However, Clarks is one of the few that is still under family ownership.


The beginnings
of Clarks
Clarks developed out of a sheepskin rug-making business started by brothers Cyrus and James Clark in the village of Street.

Its first foray into shoemaking was when James started experimenting with rug material to make slippers. The slippers were a hit and within 25 years accounted for 75 per cent of the company’s total revenues.

The goods were reaching parts of the UK that other companies weren’t, and in the 1830s its biggest single market was Ireland, which accounted for 40 per cent of its sales. The shoes were popular in Dublin, Cork, Limerick and Waterford – towns with a growing merchant class.

However, the company had anything but a smooth start as market competition intensified in the 1930s with the mass production of ready-made shoes and the firm became burdened with debts.

Mark Palmer’s recently published book, Clarks – Made to Last , tells of the company’s history and its early brushes with bankruptcy.

“They showed a lot of energy and invention but very early on they got into financial difficulties on two occasions and both times they were bailed out by cousins and other Quaker businesses,” explains Palmer.

“So they weren’t really on a sure footing until the 1860s when William Clark, who was the son of James Clark one of the founders, took over.”

William Clark, who joined the company in 1855, was determined to shake up the business. He was the first to do away with small workshops, adopting machinery and a streamlined factory setup.

William remained at the helm as an innovator for over 50 years, during which time business boomed but retained its reputation for quality, refusing to advertise its goods in newspapers, which were seen as ‘ungentlemanly’.


Clarks in the modern era
It wasn’t until 1941 that Clarks came back into fashion when Nathan Clark, William’s grandson, designed the desert boot while serving with the Royal Army Service Corps in Burma.

Sales took off when the fashion editor of Esquire in New York ran a feature on the boots and today more than 10 million pairs have been sold.

However, once again the company struggled in the 1980s as cheap shoes produced overseas increased competition. Clarks had a reputation for quality but it lacked mass market appeal and its UK factories were unprofitable and becoming a burden.

In 1993, Berisford International, a commodities group, made an offer for the company. The bid sparked a bitter family row until an agreement was made to keep the company and establish a new structure.

Today, all of Clarks shoes are made in China and Vietnam, though the company has fought to keep quality as a core brand value. All the shoes are still designed in Somerset and the company has employed retail expert Mary Portas to devise an advertising strategy.

“They’re advertisements are a lot sexier now and are more appealing to young people . . . Clarks was always a manufacturer and wholesaler, it wasn’t until the 1980s . . . when they realised that it was no longer possible or viable to make shoes themselves,” says Palmer.

“Then it was a question of building on the brand name and trying to make sure that standards were kept high.”

The change in company structure has paid off and total sales increased 9.2 per cent in 2011 to £1.28 billion as it gained market share in the US and Asia. The Clark family shared a £30 million in dividends in 2011.

“It’s a global brand now and employs 15,000 people around the world but its headquarters is still exactly where it was. The chief executive’s office is pretty much in the factory where the company started and I think that roots it to its founding spirit and that paternalistic vibe that was there in the beginning,”