The roll-out of 5G-enabled technology will have a huge impact for marketers, who will need to upgrade their digital offerings to keep pace with customer demand 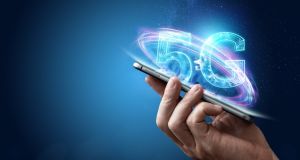 2g was text, 3g was pictures, 4g was video and 5g will be AR and VR technologies. Marketers will need to invest in these technologies as customers adopt them as first practice. Photograph: iStock

5G has been a near present feature in the news in the last year. The conversation has been dominated by the UK’s adoption of Huawei-supported technology and the potential impact it would have on national security, with the US threatening to withdraw from any potential trade agreement. The US can make these demands as it sits atop a huge tech revamp, which has seen enormous investment in 5G technology. From an Irish perspective, Vodafone is at the vanguard of this technology and has already started the roll-out. With all these pronouncements, it is easy to get lost on what the impact of 5G will be on the consumer and society at large.

Wireless phone technology humbly started by receiving and sending calls, giving birth to the first generation of wireless enablement – 2G-enabled texts, 3G-enabled web browsing and downloading of images and 4G enhanced this capability and is likely a key component in the rise of video content as users could stream videos without the curse of buffering. 5G will fully download a two-hour movie, in 4K definition, in a matter of minutes.

This speed will have a huge impact on how we communicate with each other. Skype and WhatsApp video calls have been widely adopted. At its most simple, 5G will enable video calls that don’t drop or skip – it will be like being in the next room. At the more exciting edges, we will be able to communicate through AR and beam ourselves to the front room of a loved one or into a meeting room.

This week's Inside Marketing the team chat with Paul Carton, head of consumer brand at Vodafone and Ivan Eustace, account director at Carat Ireland on implications and opportunities of 5G. Listen now:

A particularly important part of 5G is the hardware need for it can now be considerably smaller and function with less energy. This will give rise to more things being connected to the internet as the technology is easier to embed. This will become the new norm and things will become the internet of things as consumers have more connected devices than ever before. Siemens already has a connected washing machine, which enables the owner to put on a wash when they are on the way home, so the laundry doesn’t sit wet in the machine.

5G will ultimately facilitate the internet of things as it reduces bandwidth restrictions, meaning we’ll see unlimited devices connected to the internet, passing and collecting data between devices with no drop-in user experience – this is potentially very exciting for advertisers.

The increase in connected devices will lead to a deluge of additional data, which will have to be harnessed. Ikea is already investing heavily in the smart home space. Customers connect to lights at home with an app and can turn them on and off. This, in effect, creates an energy footprint. Ikea could suggest practical green initiatives and track progress, demonstrating a meaningful impact on the environment. Ikea is currently rolling out Home Solar. By connecting these solar homes, it will have live information of how much energy a home is creating, how much they are using and connect any excess to a home, which isn’t creating enough energy for their output – all enabled by 5G.

A practical hurdle for widespread adoption of 5G is that it is not a feature on all handsets. Samsung has released a specially enabled Galaxy S10. Apple doesn’t even have a 5G-enabled phone and is unlikely to have one until its usual phone release in Q3. With 48 per cent of Irish people holding onto their phone for two years or more, the rate of connection will be a drip feed versus a flood.

A more sentimental hurdle for customers is that it might be hard to care about a technology that promises speed when speed no longer feels like a problem. In many urban areas, 4G can be faster than broadband. If it ain’t broke, why fix it? Consumers are likely to have been satisfied with 3G before the roll-out of 4G. This was a time of data limits, when dial-up broadband felt recent and looking at YouTube was a new phenomenon.

Since then, we have seen an explosion in ownership – 91 per cent of Irish people own a smartphone; an explosion in ecommerce – ecommerce is estimated to be worth €2.2 billion; and a dramatic fall-off in patience. Google says more than half of all visits are abandoned if the page hasn’t loaded in three seconds. A one-second delay can impact conversions by 20 per cent.

The question is what drove this drop-in patience? Have people become less patient in the last 10 years due to the frantic pace of life or has patience diminished because of the speed with which we can access the internet? Undoubtedly, it is the latter.

5G internet connection will rival any broadband connection. This will have a huge impact on the role of mobile in the consumer’s life. It already is the main device for people. As handset providers start to understand the implications of 5G and how customers will use it, they will rapidly alter their handset to meet this need. A good primer for this is that Apple didn’t have a front-facing camera until the iPhone 4, which was released a year after 4G was being rolled out. And so, the selfie-generation was born.

What then, does this mean for marketers? In the short term, they must get a handle on their website. If you offer mobile commerce or rely on your website for leads, big steps must be taken to get your site to be best-in-class for the technology we have now and ready to adapt to the impact of 5G in the coming years.

2G was text, 3G was pictures, 4G was video and 5G will be AR and VR technologies. Marketers will need to invest in these technologies as customers adopt them as first practice. Being able to tell a story in AR and VR will become a practical necessity. Dulux is in this space, enabling customers to see what colour would look like on their walls, not to mention Snapchat, which has been long-time users of AR to enhance their app experience.

In the medium term, it is about understanding your role in the internet of things. As more devices are connected and enabled by 5G, there will be conversations between devices which remove the burden of conscious thought from the owner. A very simple example of this is a connected fridge, which registers the weight of the milk or eggs from the shelf they sit on. As the milk is drunk or eggs eaten, they will be added to your shopping list on your phone. If it looks like the milk and eggs will run out, the fridge may act autonomously and order the shopping for next-day delivery. Amazon’s footprint in the US has them primed to win this battle.

In the long term, the limit is imagination.