All aboard the Titanic Hotel Belfast 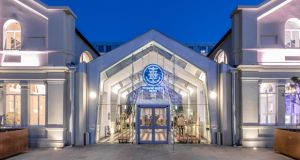 Located in the heart of the Titanic Quarter, the legendary Harland & Wolff Headquarters was transformed in 2017 into Belfast’s most iconic hotel, Titanic Hotel Belfast.

The hotel has been named “Northern Ireland’s leading Hotel, 2019” at the World Travel Awards for its second consecutive year. The hotel welcomed over 95,390 overnight guests since opening with approximately 22 per cent of people visiting arriving from the Republic of Ireland to get an authentic taste of the shipbuilding industry, the Harland & Wolff history and the legacy of the RMS Titanic.

“Titanic Hotel Belfast is more than just a hotel,” says Adrian McNally, the hotel's general manager. “It is a place to reflect on the industrial era of shipbuilding in Belfast.”

“You can learn about the directors who governed the Harland & Wolff headquarters and experience the splendour of the original drawing offices. These have been restored to their magnificent glory and are a spectacular feat of architecture, where the world’s most famous ocean liners, including RMS Titanic, were designed.”

Titanic Hotel Belfast is situated in the Titanic Quarter, an area transformed over the past decade to become Northern Ireland’s premier leisure destination. The world’s most authentic Titanic hotel has views overlooking the award winning Titanic Belfast, the slipways and the iconic twin cranes, Samson and Goliath.

Located close to numerous visitor attractions, such as the SSE Arena, W5, HMS Caroline, We Are Vertigo's indoor skydiving, not to mention the Titanic Belfast visitor attraction itself, you won’t have to go far to explore some of the greatest areas in Belfast. There are heritage assets, restaurants and shopping streets not too far away and the city centre is only a 10-minute drive away.

George Best Belfast City Airport is a five-minute drive away too, making Titanic Quarter the perfect location for any traveller in need of a hotel for a Northern Ireland leisure break or business trip.

The hotel is home to the Drawing Offices, the last remaining example of the stunning White Star Liner architecture in the world. This is where some of the world’s most famous ocean liners were designed, including the legendary RMS Titanic.

The hallways resemble ship corridors, making you feel like a passenger onboard a real ship. The hotel features 119 luxury bedrooms with hanging ship’s lanterns, riveted panels and unique maritime artwork pieces featured in every room. The rooms feature an art deco nautical theme, inspired by the style of the early 20th century. Each room has its own unique character and range from standard rooms to superior suites. The wardrobes are designed with cabin luxury in mind, and the beds are made for pure comfort. You will feel as if you have wandered into a state room on a White Star Liner.

The rooms have views of Queen’s Island and the famous Harland & Wolff gantry cranes. They are inspired by the style of the time, representing the art of shipbuilding and the ‘Golden Age of Ocean Liners’. Along with exploring the authentic style of the hotel’s design, guests can also explore the hotel’s exclusive art and heritage collection created in collaboration with museum institutions, historians, private collectors and local artists. Throughout the hotel, guests can also enjoy a permanent collection of over 500 artworks, artefacts and photographs including passenger portraits and authentic White Star Line memorabilia.

As Sir Edward Harland once said, ‘The needs of passenger comfort are of first importance’ and Titanic Hotel Belfast takes this to heart.

Titanic Hotel Belfast is not just known for its spectacular views and design, but also for its outstanding food and locally sourced menu at The Wolff Grill Restaurant. This offers refined dining in ocean inspired surroundings with incredible views. It looks upon the Titanic Belfast building and historic slipways where Titanic and her sister ships Olympic and Britannic were constructed. Locally sourced ingredients, including Fivemiletown Goats cheese, are used to curate a delicious menu created by award winning executive chef Nigel Mannion.

The Northern Irish cuisine is served in a relaxed and stylish room featuring ocean liner memorabilia and chandeliers. The Harland Bar also offers historic views, along with a host of bespoke cocktails created by in-house mixologists. Villeroy & Boch tiles that surround the hotel’s main bar are identical to the tiles used for the swimming pools and first-class bathrooms on the actual Titanic.

As well as having Deluxe Rooms, the hotel also has seven private event spaces which were the offices of the naval architect of the RMS Titanic Thomas Andrews, who was a victim of the Titanic sinking; Charles Payne, a former director of Harland & Wolff; and Lord Pirrie, chairman of Harland and Wolff between 1895 and 1924.

If you are thinking of booking a stay, the hotel has a Complete Titanic Experience on offer. Enjoy an overnight stay with full Titanic breakfast in Titanic Hotel Belfast and entrance ticket to Titanic Belfast, named as the world’s leading tourist attraction by the World Travel Awards 2016, plus one complimentary car parking space for 24 hours.

You can explore the shipyard, travel to the depths of the ocean and uncover the true legend of Titanic, in the city where it all began. Titanic Belfast and SS Nomadic are located adjacent to the Titanic Hotel. From £149 per room. Subject to availability. Terms and conditions apply.