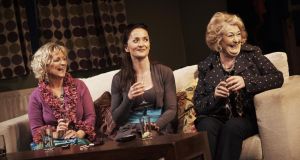 There is no subtitle to Elaine Murphy’s second full-length play, Shush, but its form, structure and main concerns could be encapsulated as, “A chat in two acts”. Following Murphy’s widely-travelled monologue play Little Gem, the biggest technical accomplishment here, by far, is Murphy’s handling of dialogue, rendered in a photorealistic babble of trivial and significant details, briskly shared between five women on Anthony Lamble’s domestic set and delivered in minute-ticking real time.

As the friends gather together, urgently and uninvited, to celebrate the desolate Breda’s birthday with rejuvenating liquor, Ferrero Rocher, gossip and home truths, the show is essentially a “girls’ night in”, cannily marketed as a “girls’ night out”. There will be laughter, advice, tears, support, bitchy comments, sharing and sympathy. And for anyone fatigued by the machismo of the Abbey’s recent Drum Belly, there will be blessed relief.

That, however, is all there will be. A careful character study that avoids anything that might be described as a significant event, metaphor or consequence, it is neither particularly theatrical nor dramatic, and director Jim Culleton’s production is stranded somewhere between a sitcom and a kitchen sink. If there is a plot, it is best described by the no-nonsense Marie, who Barbara Brennan plays as a force of nature with precisely moulded hair and a daytime talkshow vocabulary – Breda (a believably despairing Deirdre Donnelly) needs to “get her snap back” with the help of “someone to tell it like it is”. You go, girlfriend!

Murphy leaves a number of clues as to how difficult this intervention will be, the saddest of which is a motivational poster, “Dare to soar”, while everything around Breda is clearly plummeting. Her employers are downsizing, her husband has left her, her health is failing, her house is falling apart and, to increase the indignity, in the play’s first 30 minutes, her friends have given her a makeover and updated her CV.

But the play moves, with dread inevitability, towards formula: Breda, who has given up on life, is encouraged to dance again, to avenge a cheating husband with hell-hath-no-fury property damage and to accept wise grief counselling from supposedly the dimmest member of the group, Irene (rescued from caricature by Ruth Hegarty’s sympathetic performance).

Breda’s life, we understand, is at stake, but there is not much more to impart than the succour and meaning of patter. It drifts from diets and alternative therapies to cosmetic surgery and venereal disease, which is how relationships are expressed and refined. But Murphy’s writing lapses into aphorisms and sitcom-worthy one-liners as though it doesn’t have much more to say about female solidarity than the theme tune to The Golden Girls. “Who knew I could be this thin and still unhappy,” complains Niamh Daly’s picture-perfect neighbour, Ursula, and for all the commitment of the cast, that feels like a reasonable assessment of the play.
Until July 20th