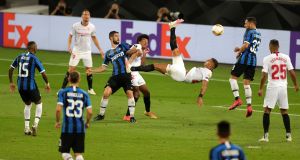 Sevilla’s Diego Carlos performs an overhead kick that led to their third goal in the Europa League final at the RheinEnergieStadion in Cologne. Photograph: Friedemann Vogel/Getty Images

Romelu Lukaku suffered the agony of an own goal that handed Sevilla the ecstasy of a sixth Europa League triumph. After an explosive opening half the final had entered its closing phase when Diego Carlos intervened to become the Spanish club’s hero.

The defender, leg heavily strapped, attempted an overhead kick that was missing before Lukaku’s attempted clearance went straight in. Inter Milan rallied: Alexis Sánchez, a late replacement, had an effort cleared off the line by Jules Koundé but, ultimately, this was Sevilla’s night.

Luuk de Jong’s reward from Julen Lopetegui for the winner that knocked out Manchester United as a replacement was to start as his central striker. Antonio Conte’s XI showed the former United players Ashley Young and Lukaku in his 3-5-2 though Sánchez was a substitute only.

Inter had not won a European trophy since the Champions League triumph a decade ago, while Sevilla had claimed this competition three times in the last six years.

The Spaniards had proved feisty against United and Danilo D’Ambrosio signalled Inter would go toe-to-toe with them by handing off Sergio Reguilón in the opening moments.

Nothing came from the free-kick but when moving down the other end instantly Inter had a penalty. A Lukaku burst took him into Sevilla’s area and Diego Carlos pulled the No 9 down. Danny Makkelie – in his first continental final – pointed to the spot but the referee gave the defender a yellow card when red seemed appropriate.

This completed a hat-trick of penalties conceded by Carlos – to follow those in the quarter and semi-finals – and when Lukaku converted for Inter he joined the Brazilian Ronaldo’s mark of 34 in a season for the club, and Conte’s team had the lead.

This initiated a first-half goalfest. Sevilla’s response was to probe via a Suso cross Inter scrambled away. But when Jesus Navas hit a ball in from the same right flank De Jong’s flying header was too powerful for Samir Handanovic, Inter’s goalkeeper beaten to his left.

In a hectic final, Conte was booked by Makkelie after the latter failed to give a second penalty when the ball hit Fernando’s hand: the manager’s protests crossed from vociferous to disrespectful.

An Éver Banega free-kick for Sevilla and a clever Young ball that released Lukaku were the only threat for a passage as the game lulled. But, then, De Jong struck via a second header, connecting with another Banega dead-ball, this spiralling over Handanovic from wide.

The lead lasted barely two minutes. Again, from a free-kick, again from a header, Inter responded. This time Marcelo Brozovic floated the ball over and Diego Godín’s hunger had him leaping through a crowd to head beyond Yassine Bounou. By the break a breather was needed by all.

The second half had a cagey beginning. When Nicolò Barella was hauled back by Joan Jordan near the centre circle, instead of firing the free-kick into Sevilla’s area the ball went sideways.

Surely, though, this was calm before the tempest started up again. So it was that, suddenly, Carlos was flinging himself at Robert Gagliardini’s shot, and, at the other end, De Jong had to be crowded out.

Then, Reguilón skated past Godín and hit the side-netting. More space opened up. Young, Inter’s left wing back, hit a 30-yard shot that was high, a sign of how his team hogged possession at this juncture. Lukaku missed after racing clear: Conte, on the sideline, was bereft.

Young’s radar was better when pinging in a free-kick towards Godín that Bounou punched clear. Now, disaster struck for Lukaku as he scored – inadvertently – at both ends.

Banega’s free-kick went to Carlos and his bicycle volley was going wide before the Belgian stuck out a leg and beat Handanovic. From here Sevilla dug in. – Guardian

1 Seán O’Brien: Anger over my parents’ break-up never left me
2 Dan Martin back to third in Vuelta after a wet and wild Stage 6
3 Mayo relegated for first time in 23 years after pulsating Tyrone encounter
4 Hugo Keenan and Will Connors: The best of friends, the best of debuts
5 Ireland 50 Italy 17: Ireland player ratings
Real news has value SUBSCRIBE
Crossword Get access to over 6,000 interactive crosswords