TV View: Giles bows out as Portugal draw clear at the death 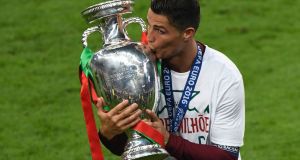 Fernando Santos and Didier Deschamps might have had major selection headaches for the final but they were in the ha’penny place next to the head-wrecking choice us lot had to make, whether to spend the evening in the company of RTE, TV3, BBC or ITV. That’s three choices too many.

And how could you choose? TV3 had produced the mother of all coups by having Martin O’Neill as a guest for the final, but then ITV had Roy. And the BBC always have the best montages, they can even make a misplaced Jack Wilshere pass look like art. But RTE had John Giles for his final shift on their panel so you couldn’t possibly miss that.

At least TV3 were decent enough to start half an hour before everyone else so that gave the batteries in the remote time to do their stretching exercises, Martin O’Neill kickstarting the show by having a chat with Tommy Martin. Viewers were invited to tweet their own questions to the gaffer, but Tommy, disappointingly, opted not to put the following queries to him:

“Would you give Keano a kiss from me?”, “Have you ever been licked by a cat?” and “During Italy game after Wes missed his chance did you think b****x that’s it now?”

Any way, a highly enjoyable chat it was too, the highlight O’Neill’s pronunciation of the German manager’s surname, making him sound fleetingly Barry White-ish, and him getting a teeny bit spikey when Tommy asked him if he regretted picking Shane Duffy for the French game.

“Why would I regret the decision?! He’ll certainly learn from it - because he’ll not play for the next four years.”

He confirmed that was a joke, so the countrywide ‘hold the back page’ orders were withdrawn.

Over on ITV, meanwhile, Martin’s mate Roy was partaking in so much banter you wondered if they’d hired a look-a-like for the night, his explanation for the invasion of moths at the Stade de France being that “Giggsy had opened his wallet”. At which point Giggsy reminded him that he once lent him a car for a week and didn’t get it back for six months. “There was a full tank when I gave it back,” Roy shrugged, in a ‘what’s your problem kind of way’. The new Little and Large?

Back to RTE and there was Gilesie and you’d be thinking our telly football-watching days would never be the same again, 98.24 per cent of the population knowing nothing but Gilesie on their screens for the very biggest of their telly football-watching memories. A lovely, generous, good and decent man, too. So, Kleenex at the ready. Although he was probably most preoccupied by Apres Match’s prediction for how RTE would bid adieu to him: by bringing “Twink on rollerblades” in to the studio at the end. “Ah Jaysus, Darragh.”

Closing ceremony time. George Hamilton was mad in to the crashy, crashy, bang, bang music again, sounding positively deflated when it was over. Jim Beglin, on the other hand, sounded quite relieved, he might be a younger man but he’s no funkster.

And then we finally had some football on our hands, but then Ronaldo and Payet collided and Ronaldo rolled about and Jim thought he was faking it, (no more than ourselves), but then Portugal’s world crumbled when he fell in to a tearful heap. And a moth chose a really bad time to try to get a selfie with him, landing on his face as he contemplated the worst moment in his entire existence on earth. Off he went. Back on. Off he went again. Gut-wrenching. They were even those were cruel enough to suggest this meant Portugal were down to 0 men.

Come half-time, the ITV lads all said they knew he was done for as soon as he went down. “You don’t have to be a physio to know that,” said Roy. “Obviously we played at a decent level, well the three of us have …..,” pointing to exclude Lee Dixon from his declaration. He’ll be appearing at the Edinburgh Festival yet, that fella.

The consensus among all the pundits across the four channels was that the game was a bit rubbish, Gilesie particularly irked by Pogba’s display - “He’s not contributing at all, nothing!” - picking out a clip of him doing his traffic cop impression rather than actually getting in the car and doing some driving.

“If he had the moral courage of Ciara Mageean, he might be worth €100m, Darragh,” he didn’t say, but you’d have to assume he was thinking it.

Moussa Sissoko, meanwhile, looked, by comparison, a €200m man, which wouldn’t have lightened the mood of your average Geordie after he led them to relegation. Funny old game.

Second half. Even the moths had nodded off. George and Jim sounded like they were playing Snap to keep themselves awake. You couldn’t but recall all the great finals we’ve seen over the years, like ….. like …… come to think of it, this one was a zinger compared to most.

Extra time. If you had a deck of cards, you’d be playing Snap yourself.

And then. Goodness gracious great balls of fire. Portugal a one man team? Eder said ‘hello?’

Just time for that adieu to Gilesie. A tribute from Michael D, and a montage of clips that featured himself and Billo, as if the sorrow wasn’t spiralling enough.

“They say when you’re enjoying yourself time flies, and the time has definitely flown,” said the man himself, Eamon and Liamo paying him very lovely tributes, Gilesie remaining typically stoic through it all. Both noted that he’s far from done, you’ll still read him in The Herald and hear him on Newstalk, it’s just his RTE shift that has ended.

“We were out on Friday night - and we’ll be out again,” said Brady. Gilesie grinned. There’s still plenty of living and partying to be done. May he enjoy every moment.