Patrick Madden looks at the weird and wonderful from Brazil 2014 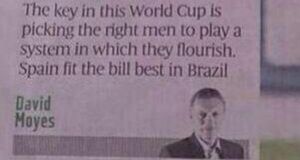 Even when out of the spotlight, poor Moyesie is in it. 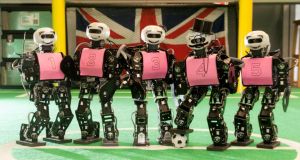 When will the torture end for David Moyes? Even while on a sabbatical after his ill-fated tenure at Old Trafford he still can’t avoid looking a bit daft. He must be smarting after Louis Van Gaal has been presented with a very favourable start to the Premier League season, compared to his baptism of fire last year.

And it must grate a little Marouane Fellaini has managed to do in one World Cup game what he couldn’t manage in an entire season with United – score. But now, to rub salt into the wounds, this newspaper article from before the tournament has surfaced. Spain to win it eh, Dave?

Officials have had a pretty negative press at the World Cup so far, but the linesman in the Spain v Chile match may have restored a bit of pride for the lads in charge.

After offering his hand to greet an important looking man in a suit, he was snubbed, but recovered well by promptly slicking back his non-existent hair. It was cool and calm, and finally gave Iker Casillas something to smile about.

Poignant, or morbid? Either way, Marca’s brilliant back page yesterday reflects the feeling this is the end of the road for one of football’s finest ever sides. As the paper went on to say, ‘They achieved what no Spaniard thought they could’.

Patrice Evra has recently remarked how strange it is to be in such a harmonious French squad, but Paul Pogba nearly felt the wrath of Les Bleus after his tussle with Wilson Palacios.

“I told him: ‘You should have been given a red. If that had happened, we would have each in turn given you a slap.’”

It would have given Evra the perfect chance to give him a whack for gallivanting off to Juventus and leaving his Manchester United teammates stuck with Anderson and Tom Cleverley.

That’s how many shots on target Diego Costa managed during Spain’s two-game defence of their World Cup crown. The rat who joined a sinking ship.

Nike’s new animated World Cup advert sees a group of unbeatable ‘clone’ footballers defeat Ronaldo, Rooney and, err, Tim Howard, sending them into a life of obscurity. Pure fantasy? Maybe not, as teams of robot footballers are currently fine-tuning ahead of the Robot World Cup.

Robocup 2014 starts on July 21st and will see the world’s leading robotics teams, including representatives from the USA, China and Plymouth University, England, compete across seven different leagues. The first Robocup was held in 1997 - the goal? To develop a robot football team capable of beating the human World Cup winners by 2050.

Given Steven Gerrard’s performance in England’s opener against Italy, you’d have thought robot footballers were already competing on the world stage.

Watch out – Zlatan’s about.

After he lost the battle of the egos with Cristiano Ronaldo and Portugal sent Sweden packing in the World Cup play-offs, the big man vowed not to grace the tournament with his presence.

But clearly, he couldn’t resist, and as rumours circulate of Ronaldo’s departure from Brazil, Zlatan appeared at the Maracana with his son to watch his former Barca team-mates get beaten by Chile.

BBC’s Mark Lawrenson attributed Chile’s energetic performance against Spain to their familiarity with the conditions: “A lot of these guys play in this part of the world,” he said.

Number of Chile players on the pitch who play in South America? One.